Catherine Elizabeth Middleton was born to Carole and Michael Middleton 40 years ago at the Royal Berkshire Hospital in Reading on 9 January 1982.

The Duchess of Cambridge or Kate as she prefers to be known, took to Twitter to issue a personal message on her 40th birthday and thanked her followers for their ‘very kind birthday wishes.’ She also thanked one of her patronages, the National Portrait Gallery and photographer Paolo Roversi who took a series of pictures released to mark her 40th birthday.

The tweet also included one of the three photographs released on Saturday evening by Kensington Palace. 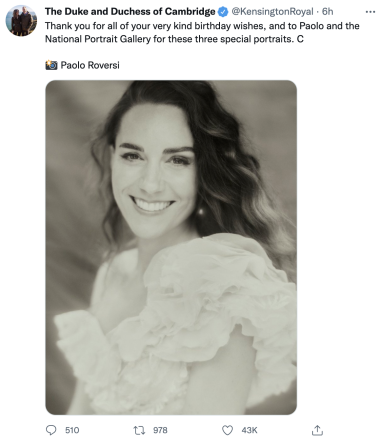 Photographer Paolo Roversi took the timeless portraits in November at Kew Gardens.  Speaking about the experience, he said meeting and working with Kate was a “true honour.”

“I was moved by her warmth and friendly welcome and enchanted by her shining eyes that reflected the loveliness of her soul and her smile showing the generosity of her heart.

“It was a profound and rich experience for me, an unforgettable moment.”

The three portraits will be included in the National Gallery’s permanent collection and take part in a ‘Coming Home’ exhibition, which will see several art pieces shown across the country in areas meaningful to the subjects portrayed.

Kate’s three portraits will be shown in Berkshire – where her parents Michael and Carole live, St Andrews – where the Duke and Duchess of Cambridge met and attended university and Anglesey – where the Cambridges first lived as a married couple.

One of the defining style icons of our time, the Duchess of Cambridge rarely puts a foot wrong when it comes to fashion. It’s coming up to a decade since she officially joined the royal family and the mum-of-three has evolved her signature style, making bolder choices as the years have gone by. In fact the Duchess of Cambridge’s style now shares some similarities with other royal family members.

In the early days of her marriage to William, the Duke of Cambridge, Kate was rarely seen in trousers (unless it was skinny jeans for a sporting activity), but now she embraces tailoring and the latest trends in a cool, confident manner. 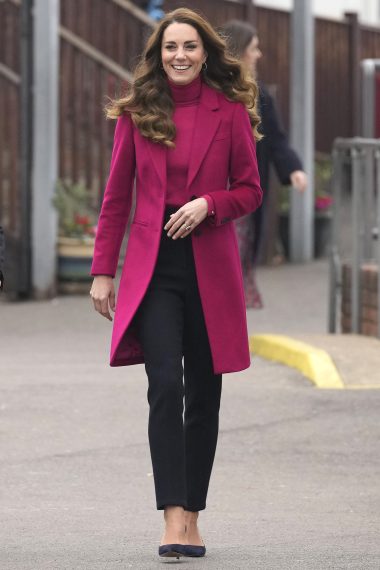 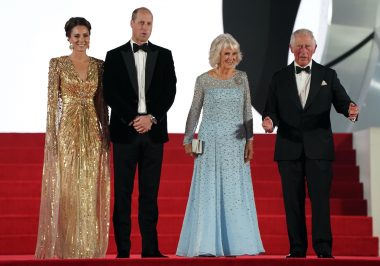 Kate and Prince William with Prince Charles and Camilla at the Bond Premier in 2021. Photo credit: PA

Could the same be said of other members of the royal family when they hit the big 4-0?

As Kate celebrates her milestone birthday today, we look back at how her personal style compares to other royals at the same age…

The Queen turned 40 on April 21, 1966. By this time, the monarch had already perfected her signature look for public appearances: a knee-length dress and matching frock coat in a vivid colour (to ensure she stands out from the crowd) with gloves, hat and her trusty Launer handbag. 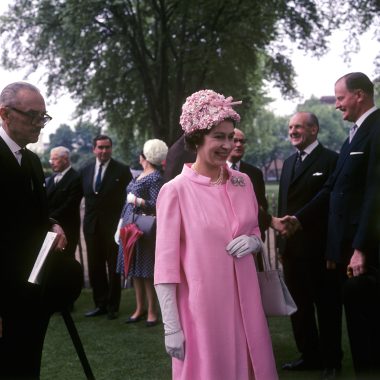 Kate does embrace bold colours on occasion (she always looks stunning in red), but she varies her outfits a lot more than Her Majesty and chooses more casual ensembles for outdoor events and activities. 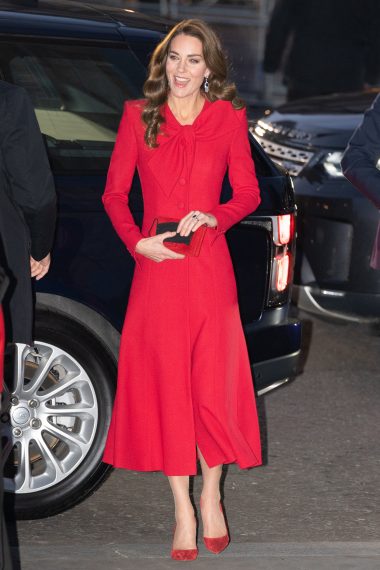 The Duchess of Cambridge arrives for the Together At Christmas community carol service. Picture credit: Stefan Rousseau/PA Photos.

Princess Margaret, who turned 40 on August 21, 1970, shared a fondness for frock coats, sensible court shoes and hats with her sister, the Queen. 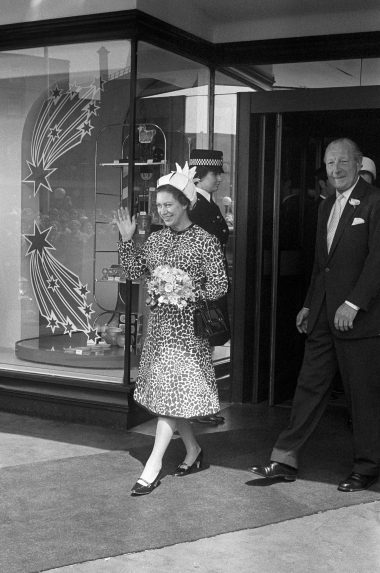 Compared to the Duchess of Cambridge, Princess Margaret’s outfits tended to be more formal, though she loved a glittering gown for high-profile events, as Kate does.

A dedicated follower of fashion, Princess Anne rocked some incredible Sixties mod minidresses and bold Seventies suits in her younger days, and her bouffant hair ‘do became famous in itself. 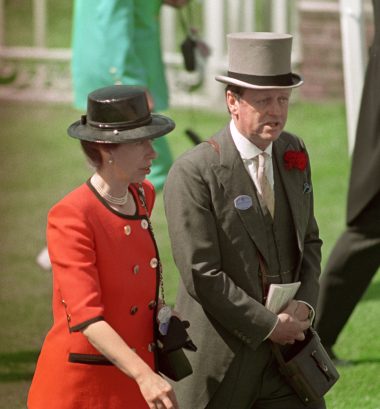 Photo of The Princess Royal at Ascot in 1993. Picture credit: Martin Keene/PA Photos.

By the time she turned 40, in 1990, the Princess Royal had toned down her style considerably, but she stuck with the voluminous hair. Kate’s Christmas Day outfits are often similar to Princess Anne’s, featuring classic wool coats accessorised with leather gloves and boots.

The Duchess of York was already divorced from Prince Andrew when she turned 40 in 1999. During that period, Fergie was often pictured in boxy, dark-coloured skirts or trouser suits. 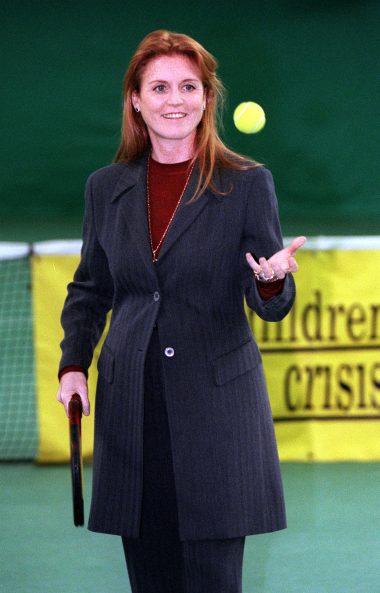 Photo of The Duchess of York at London’s Queen’s Club in 2000. Picture credit: Chris Young/PA Photos.

By comparison, Kate is a lot more adventurous with her style, embracing bright hues, bold prints and trendy silhouettes.

Sophie, Countess of Wessex, turned 40 in 2005, a time when she favoured feminine tailoring, often in white or pale hues. 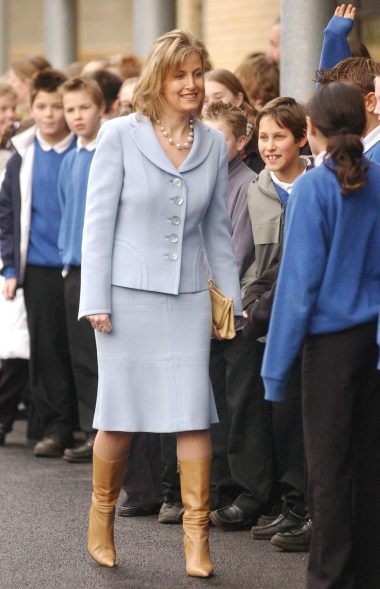 Photo of Sophie, Countess of Wessex on her 40th birthday in 1995. Picture credit: Chris Young/PA Photos.

The Countess managed to side-step many of the worst fads of the Noughties by keeping her style relatively classic, and that’s also what Kate does. While the 40-year-old nods to current trends, she knows how to avoid anything that will date quickly.

Happy 40th Kate! We love your style and wish you the happiest of birthdays! 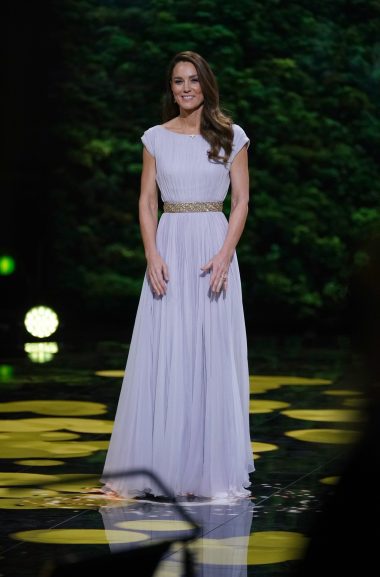 Photo of The Duchess of Cambridge on stage, during the first Earthshot Prize awards ceremony. Picture credit: Yui Mok/PA Photos.