Radiohead: How the epic album 'OK Computer' defined an era

ONE of the most iconic and innovative bands in the world, Radiohead quickly achieved critical and commercial success in the 1990s with their first two albums ‘Pablo Honey’ and ‘The Bends’.

But it was their third LP ‘OK Computer’, released in 1997, that thrust them on to the world map with an epoch-defining release that showed this Oxford quintet were terabytes ahead of their contemporaries.

‘OK Computer’ is widely acclaimed as a landmark record of that decade, is hailed as one of the best albums in pop music history, and a milestone of the Generation X era, writes James Iles.

‘R’ is for Radiohead

Since 1994, they’ve worked with producer Nigel Godrich and artist Stanley Donwood, joining creative forces for an experimental outlook that has been credited for furthering the sound of alternative rock.

After releasing their debut single ‘Creep’ in 1992, which became a huge hit after their debut LP ‘Pablo Honey’ (1993), Radiohead ascended the commercial and critical success stakes with their second album ‘The Bends’ (1995).

‘OK Computer’ (1997) then sent the band’s credibility – and the album’s listeners – into another dimension.

The LP’s title is taken from the Hitchhiker’s Guide to the Galaxy radio series which the band had been listening to on their 1996 tour bus. It was the character Zaphod Beeblebrox who says “Okay, computer, I want full manual control now.”

Thom Yorke also stated the title refers to both embracing the future and being terrified of it at the same time as well as being overwhelmed by the speed of technological advancement that surrounded them.

Produced by the band and Nigel Godrich, the album features the singles ‘Paranoid Android’, ‘Karma Police’, ‘Lucky’ and ‘No Surprises’. It is hailed as one of the greatest works of Radiohead’s – or any artist’s – catalogue.

The foundations of this seminal record began in 1995 when the group recorded ‘Lucky’ for the Warchild project’s ‘Help’ album.

They enrolled Godrich, who had been an audio engineer on ‘The Bends’, as a co-producer – with great results.

Partly influenced by the war in Bosnia, the track was a stand-out song on the ‘Help’ charity album (it was even chosen as a promotional single) that also featured contemporaries Oasis, Suede, Pulp and Blur.

Its success convinced Radiohead to self-produce their next album with Godrich, and they began working together in early 1996.

Recording took place mainly at at St Catherine’s Court, near Bath – a rural mansion owned by the actress Jane Seymour. The group enjoyed the ambiences there, especially the variety of acoustic settings in the different rooms of the house.

Released in May 1997 ‘OK Computer’ is a deep dive into the farthest reaches of dark emotions that jarred against the sunny optimism of Tony Blair’s landslide election victory the very same month.

Thom Yorke was inspired to write the lyrics as an observation of the faster speed of the world in the 1990s while the group experimented with song structures, avant-garde and electronic sounds. 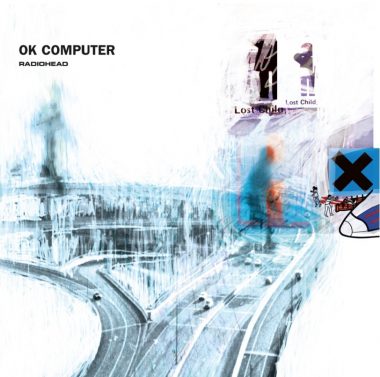 Released in May 1997, ‘OK Computer’ was an era-defining epic album that changed the course of alternative music. The sleeve art is by long-time collaborator Stanley Donwood (s)

Wailing guitars herald the start of the album on ‘Airbag’ which simultaneously compete with and complement the programmed feel of Selway’s drumming loops and Colin Greenwood’s bassline that cuts in and out like a 1970s dub track.

Yorke wrote the lyrics partly as a comment on the false sense of security of modern transport, having been inspired by a magazine article titled ‘An airbag saved my life’, also referencing the reincarnation themes of ‘The Tibetan Book of the Dead.’

Paradoxically, the group were embracing the scope of new technologies for their music while railing against its impact on their everyday lives.

‘Paranoid Android’ is a four-part, six-minute and 27 seconds epic that scored Radiohead’s UK singles peak, hitting the No.3 spot despite its lengthiness and the assumption it was not very radio-friendly. Radio 1 were actually playing it a dozen times a day at one point.

Beginning with acoustic guitars and shakers, Yorke’s paranoia fears “What’s that?” while “Kicking sqealing Gucci little piggy” refers to a bad experience he suffered in an LA bar surrounded by strangers who were high on cocaine.

Two minutes in, and the “Why don’t you remember my name?” section delivers a heavy rock feel with nearly a minute of Jonny Greenwood’s distorted guitar solo.

The song calms down in the “Rain down” Portishead-esque choral part before a coda on the rockier second part returns to close out the track.

It’s like a ‘Bohemian Rhapsody’ for shoe-gazing introverted types and the song name is another title taken from Hitchhiker’s Guide to the Galaxy, this time referring to Marvin the Paranoid Android.

The bluesy guitars and dreamy electric piano reverbs soothe the sonics after the intensity of ‘Paranoid Android’, while the lyrics were inspired by ‘Martian poetry’ where everyday things and human behaviour are described in a strange way, as if by a visiting Martian who does not understand them.

‘Exit Music (For A Film)’ is loosely based on ‘Romeo & Juliet’, the band having been approached to write a song for the end credits of Baz Luhrmann’s 1996 film based on the Shakespearean tragedy.

They also offered up a version of ‘Talk Show Host’ for the soundtrack, but used this dark and moving track, complete with moody Mellotron choirs, for their own LP.

Ending with the line: “We hope that you choke” after the imaginary couple end up ‘in everlasting peace’, it pulls no punches.

‘Let Down’ should have been a single in my opinion and is therefore my “underrated track” for this feature.

It’s a beautiful, arpeggiated song with Yorke’s double-tracked vocals and gorgeous harmonies juxtaposed against his lyrics which are critical of the Generation X tendency towards what he called fake emotions, or emotions for the sake of it.

‘Karma Police’ was a single though, and it hit No.8 in the UK charts.

It’s based on an in-joke of the group’s whereby they feel the “karma police” will catch up with everyone eventually. An anthem for workers frustrated by the middle management?

Probably the most skipped track, ‘Fitter Happier’ uses the Macintosh SimpleText programme (remember that?!) to coin a series of phrases popular in the corporate world of the 1990s.

‘Electioneering’ is one of the rockiest numbers by Radiohead and one of their most political too. Influenced by the Poll Tax riots and Noam Chomsky’s ‘Manufacturing Consent’, Yorke warns: “I will stop at nothing, when electioneering, I trust I can rely on your vote.”

The black and chaotic ‘Climbing Up The Walls’ was influenced by Yorke’s time as an orderly in a mental health hospital just as care in the community came into force, and serial killers. Say no more.

With a Beach Boys feel, at least sonically speaking, ‘No Surprises’ employs glockenspiels and tender harmonies in this bittersweet and ‘messed up’ nursery rhyme.

The gentle melodies perfectly spotlight the darkness of the lyrics wanting to slip away from a life performing “A job that slowly kills you” while calling for the collapse of the government.

It became another classic single, peaking at No. 4 in the UK in January 1998.

‘The Tourist’ takes the pace off the LP with its slower, more spaced out feel. It was written by Jonny Greenwood after watching tourists trying to cram too much into their travel itinerary.

Yorke pleads with them to “slow down”. It’s a metaphorical message still relevant today as we compete with the pace of technology, that is hurrying so many aspects of our lives.

‘OK Computer’ was Radiohead’s first number-one UK chart debut, and brought them commercial success around the world, drawing critical comparisons to The Beatles, Pink Floyd and David Bowie as they carried the baton of ‘music pioneers’ forward.

However this game-changing record, with its heavily-marketed promotion later caused the band to rethink the over-commercialism of their releases, which was borne out on future album campaigns.

‘OK Computer’ had been followed by the year-long ‘Against Demons’ world tour, including their first Glastonbury headliner in 1997.

Yorke famously fled the stage during that set owing to some technical issues, yet the performance still put them on the higher plane of rock’s greatest live acts.

Frazzled by touring and promoting, and the band released their next LP ‘Kid A’ (2000) on the internet, breaking new ground in the process, but without releasing any promotional singles, and doing the bare minimum of press work.

Rescued from defunct formats, prised from dark cupboards and brought to light after two decades in cold storage an expanded version of ‘OK Computer’ called ‘OKNOTOK’ was issued in 2017, some 20 years on from the original 1997 release of ‘OK Computer’.

It offered an even deeper take of one of the greatest albums in the galaxy.

* Check out James’ ‘R is for Radiohead:OK Computer and ‘Best Of’ playlist on Spotify at tinyurl.com/y2n7llkz

Nine simple strategies to help keep spiders out of your home

Christmas is cancelled? Oh no, it isn’t!