Ins-purr-ational Cat in the Hat at the Birmingham Rep gets the thumbs up!

THE LEGENDARY Dr Seuss wrote The Cat In A Hat book back in 1954 on a mission to inspire the very young to read.

He succeeded! Youngsters had their imaginations fired with playful verse and vivid illustrations as opposed to the mundane goody-goody lives portrayed in that Dick and Jane era – Dr Seuss’s characters were both extraordinary and nicely naughty.

Twelve years after Dr Seuss’s death in 2003, ‘The Cat In A Hat ‘was released as a film, which went on to capture the minds of new generations. Now it is a play which is at the Birmingham REP. 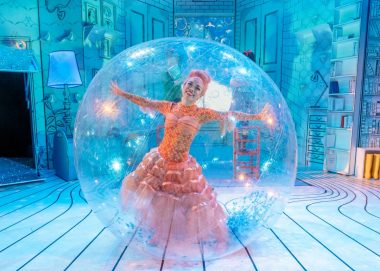 In fact it is an interactive play where the young audience spend a lot of time on their feet joining in the frolics – that is when they are not avoiding being squirted with water by Boy (Sam Angell) and Sally (Melissa Lowe). The rest of this highly lovable and very physical cast comprise Charley Magalit as Fish, Celia Francis as Thing 1, Robert Penny as Thing 2 and the resplendent Nana Amoo-Gottfried as the Cat In The Hat himself.

It is inspirationally directed by Suba Das and equally inspirationally designed by Isla Shaw. They know their audience, which is an adult free zone. The text is a two-way exercise and the set to is left to be coloured in by young imaginations.

Better qualified to review the show than me were the two seven-year-olds that accompanied me – that’s Bobby Whyman and Harrison Burbidge. The burning questions preshow were “How will the cat get in the hat?” and “How will it look like a film when it’s real life on stage?” 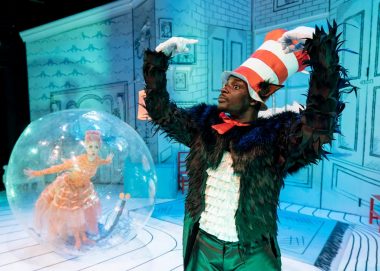 All was revealed successfully. They said “It reminded me of the circus and I loved the cat balancing on the ball” and “I loved everybody being naughty and enjoyed feeling naughty joining in. It was really entertaining and all the cast were well dressed and acrobatic.” 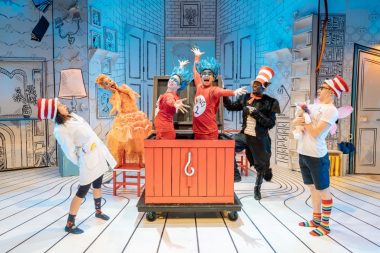 I can’t argue with any of that Bobby and Harrison – anything that inspires youngsters to both enjoy the magic of watching and making theatre for years to come (and reading) gets a thumbs up from me.

Children – catch it if you can at various child-friendly times all this week.

Visit birmingham-rep.co.uk/whats-on/the-cat-in-the-hat-1.html#event-datesTimes for more information on dates, times and tickets.