AS OPPOSED to other city centre theatres, the REP is not only a producing house but also one, which produces new work at the cutting edge of performing arts.

I was therefore expecting a very different Peter Pan from the one so closely guarded by the JM Barrie trust until it ran out of copyright 70 years after his death. Great Ormond Street Children’s Hospital still get all the royalties, though the play itself can now be and is changed into many formats.

Picture by Johan Persson. sLast year the Hippodrome did a full panto version featuring Donny Osmond, which, fun as it was, barely bore any resemblance to the original story. This version conceived and directed by the very talented Liam Steel certainly delivers ‘different’.

Gone are the snow capped rooftops of Victorian London and the ‘Darling’ children looked after by Nanny the dog.

We do however still have the ‘Darlings’ – Wendy, Michael, and John but no Mr or Mrs Darling. Instead we have foster mum Jess who, in a parody of the original where Mr Darling blames the woes of not being able to tie his bow tie on the children, Jess does the same as she gears up for a night out clubbing with her mate to celebrate a birthday. She exchanges harsh words with Wendy, the mixed-up, mother surrogate to her siblings before leaving. 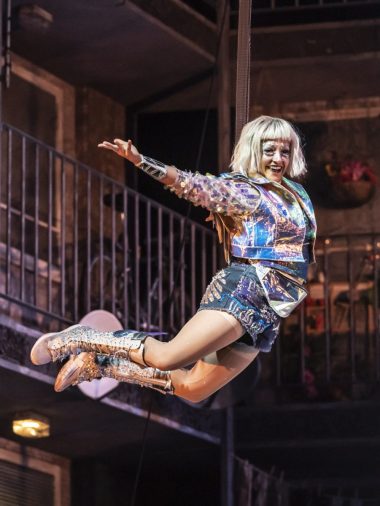 So far JM Barrie hasn’t got a look in and there was no Nana the dog, my favourite character as it happens – then maybe that’s a blessing for it would surely be transformed to a Rottweiler. Suddenly, wonder of wonders! Not only in flies the boy who never grew up but he is speaking the lines that I know! Kisses and shadows et al – all is forgiven and now I realise what Steel is trying to do – not to try and upstage Barrie but make him accessible – this show is not aimed at the likes of me but at a new seven plus generation – my word they were lapping it up too.

Off Wendy flies, spearheaded by Tink and in red devil formation with Peter, John and Michael to Neverland to meet the lost children – yes in this new diverse PP that oozes equality there are lost boys as well as girls.

In the original, Captain Hook is doubled by Mr Darling – here the dastardly cad is played by a woman – ie doubled by foster mum Jess.  Her pirates look like refugees from a Mad Max movie and sing rap songs rather than yo-ho-ho shanties. 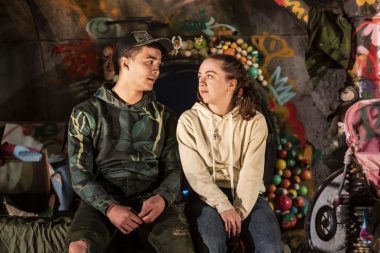 Lawrence Walker as Peter, has an awful lot of action to do, flying as he does to all high corners of the huge stage, summersaulting and generally being a one boy gymnastic team. He also manages to engage and show Peter’s soft underbelly, despite being more feisty kick-ass street kid than pretty young scallywag.

Mention must be made of Georgia Christou, the co-adapter of this ‘reimagining’ and to designers Michael Pavelka for the set and Laura Jane Stanfield for the costumes.

In summary, this is a show with lots of action, sounds and music more of the streets than fairyland that boldly goes where its creators intended. It is for that age group where we don’t quite understand them for a few years.

Whilst I will always love the original, the kids screamed their approval of this new age Pan and I can’t disagree with them – it delivers ‘reimagining’ in spades.

Peter Pan runs until January 19 at the Birmingham Rep.