There will be 11 one-act plays performed tomorrow and Sunday, March 3, at the event which is now in its 58th year.

The plays are judged with the winners going through to the quarter final of the All England Theatre Festival.

Tomorrow’s action kicks off at 2pm with the New Kinvers’ Players performance of Between Mouthfuls by Alan Ayckbourn. It centres on two conversations taking place between different couples who are having problems with their marriage.

The second play will be The 32 SKUDI by Alvechurch Dramatic Society, adapted from a Bertolt Brecht short story about a tailor who agrees to make a coat for a philosopher and ends up being faced with major questions about his own state and religion.

The third play on Saturday afternoon is Rabbit by The Kingswinford School KS3 Drama Group.

The Saturday evening session starts at 7pm with Studio B Performing Arts staging Locked In by John Pickett. It is set in a nuclear fall-out shelter and looks at mental health – how human nature can change when pushed to the absolute limit.

Then after Mayhem Theatre Company has performed John Bowen’s Silver Wedding, the play Platform 2 by Paul Robinson will bring the curtain down on the first day. Performed by the Corbridge Roche Theatre Company, Platform 2 is about two complete strangers who meet on a railway platform.

Sunday begins at 2pm with Holly Bush Arts Group performing Bert, an original piece of writing by David Pitt about a man who sits in his car waiting for eternal nothingness. 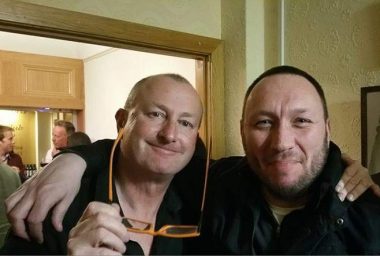 The other two plays on Sunday afternoon are Stourbridge Theatre Company’s A Small Familiy Murder by Simon Brett which centres on a killing in a nursing home and Wordsley Amateur Dramatic Society (WADS) staging After The Party by M J Edwards.

The Sunday evening session features two plays before the results of the judges are revealed.

Mayhem Theatre Company will perform Future Past by Stephen Moran about a man who visits a psychiatrist to have his mental state assessed following a car accident and Theatre 282’s Coffee Mo(u)rning by Ian Dolman about a family who hold a charity event in memory of a friend.

Each of the plays will be critiqued in front of audience members after each performance and marks are awarded to the groups for their acting, direction, stage presentation and dramatic achievement.

The winners of the weekend are announced after the final show on Sunday with the overall winner and runner up of the weekend going through to the quarter final of the All England Theatre Festival.

Visit worcs-theatre-festival.org.uk for more on the festival or www.norburytheatre.co.uk to buy tickets priced at £6 per session.

Tickets can also be purchased from the Norbury Theatre – norburytheatre.co.uk or by calling 01905 770154.