THE WORCESTER Gilbert and Sullivan Society will march into Droitwich tomorrow with its production of Yeoman of the Guard.

The shows are running at 7.30pm at the Norbury Theatre each evening from tomorrow until Saturday, November 9.

Everything about the ‘Yeomen’, from the grandness of the music to the elaborateness of the plot, is bigger and bolder than any other of Gilbert and Sullivan’s operettas. 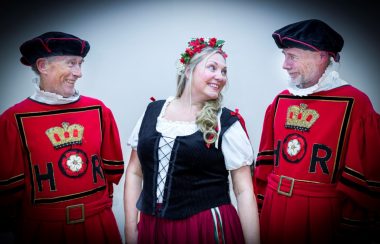 The musical, set in the Tower of London in the 16th century, tells the story of the war hero Colonel Fairfax.

He was unjustly framed, imprisoned, and condemned to death for sorcery and plans by Sergeant Meryll and his daughter Phoebe are afoot to free Fairfax by disguising him as one of the Tower’s guardians – the famous Yeomen of the Guard.

Director, Christine Davies said: “The show is one of the darker ‘comedies’ produced by Gilbert and Sullivan yet it has a rich collection of characters, very successfully portrayed by a strong cast of principals and great chorus.

“It is a heart-rending story being brought to life with the fabulous costumes our society is renowned for.”

Fix your Bike Voucher Scheme: Apply for a £50 voucher