AMBITIOUS proposals for 51 homes on the site of Droitwich’s former Raven Hotel building were presented at a special virtual meeting last night. 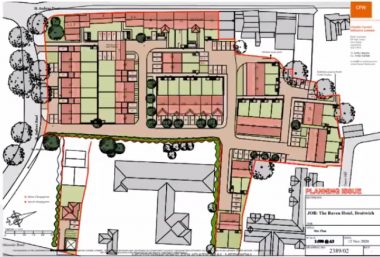 The plan for the site. s

The historic frontage and buildings – protected by Grade II listed status – will be maintained as part of the plans which have been submitted to Wychavon District Council. The other properties will be ‘classic looking’ new builds, similar to some of the Georgian homes in the town.

The meeting on Zoom was chaired by Wychavon District Council leader Coun Bradley Thomas and the presentation was given by Sian Griffiths, the agent for the developer. 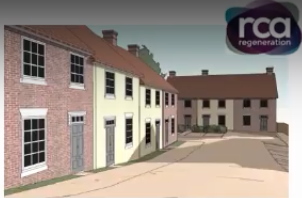 She said the idea of making some of the properties mock Tudor was mooted but it was felt they would ‘compete too much’ with the ornate Raven Hotel building and ‘steal some of its limelight’.

Ms Griffiths urged people to look at the plans and what was being proposed, adding the applicant was happy to talk about the plans and this was not the final decision. 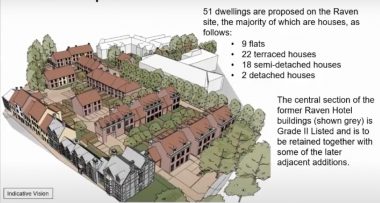 The 3D image of how it would look.

Now the plans are in, there is a minimum of 21 days consultation set out for the plans and Holly Jones. responsible for planning and infrastructure services on Wychavon District Council, said comments would be accepted from now until a week before the application was determined.

She envisaged it would go before the planning committee in April, at the earliest.

Comments by residents, Droitwich Town Council and other stakeholders, for example Historic England, would all be considered.

But, she stressed, they would need to be made to the case officer or via the Wychavon District Council planning portal so they could be taken into account when the decision was made.

In the post-presentation question and answer session, a query was made about whether local tradespeople and builders would be used.

Ms Griffiths said there was no reason why not and the project would be going out to tender locally. 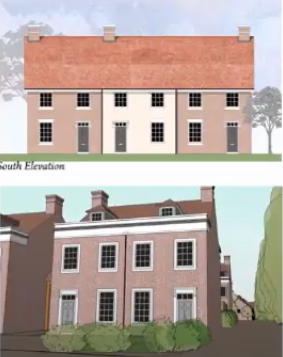 How the ‘Georgian’ homes alongside The Raven Hotel would look. s

Coun Bob Brookes asked about the brine pipes, which run under the former hotel site, and whether they would be maintained.

Ms Griffiths said she would get back formally to the councillor but vowed to ensure the brine could still flow, even if the pipes had to be redirected.

On the subject of brine, Coun Bill Moy, from SOBBS (Save Our Brine Baths), asked if it would be possible for Raven House – the manor house – to house the baths.

Ms Griffiths asked Coun Moy to send her details of the Brine Baths and what funding was in place for the project and it would be looked at.

It would depend on the financial viability.

Coun Brookes also asked for the Raven Hotel sign and any other items of historical value to be retained – even if it was in the museum.

Ms Griffiths said if people outlined items they wanted kept, they could be preserved during the development and passed on.

On a question about social housing, Ms Griffiths said it was up for discussion but added – because of the cost of the refurbishment and the demolition – it could be there was no affordable housing or a small amount. She added there could not be the 40 per cent usually stipulated by Wychavon District Council.

On parking spaces available, there will be two spaces (not including garages) for each property, although some of the smaller flats may just have one.

There would be secure cycle parking for each of the properties.

Concerns were raised about holes in the roof – caused by vandals and thieves taking tiles – which had led to some parts of the building falling victim to weather damage.

Ms Griffiths echoed previous reassurances by both Wychavon District Council and the developers that the holes in the roof were in the buildings due to be demolished and not the Grade II listed section which was in a much better state of repair.

When asked about how the building work would be done. She added the phases had not yet been decided but it was probable the demolition and the new builds would be done first.

Ms Griffiths added, it would be determined in consultation with the officers and through planning conditions.

She added her clients understood once the demolition was under way the main Raven Hotel parts would not be left open to the elements and there was no question the renovation and the demolition would be intrinsically linked.

And she urged people to get involved with the Neighbourhood Plan Group.

Click here for the planning application, associated documents and have your say on the plans so they can be considered as part of the application.

Click here to watch the whole 90-minute meeting, featuring the presentation and the question and answer session.