DROITWICH’S King George V Playing Fields fell victim to the worst ever vandalism and attempted arson attacks in its history over the weekend.

The two days of destruction began on Friday night when panels were ripped off the spectator shed.

Then on Saturday night a large heavy piece of wood was used as a battering ram to break through the door of the pavilion and smash double glazed windows.

Once inside an attempt was made to set the curtains on fire but  fortunately, they were flame retardant. It did, however scorch the door frame.

Another arson attempt was made in the outdoor ladies’ toilets.

The vandals also pulled downpipes off the pavilion and the back of the boxing club and another arson attempt saw them pile the pipes in the corner, put twigs underneath and try to ignite them.

Anti-social behaviour and criminal damage has been going on at the site for the past three years but Richard Whittall, the chairman of the Droitwich Spa King George V Sports Association CIC which runs the site, said this was the worst it had been. 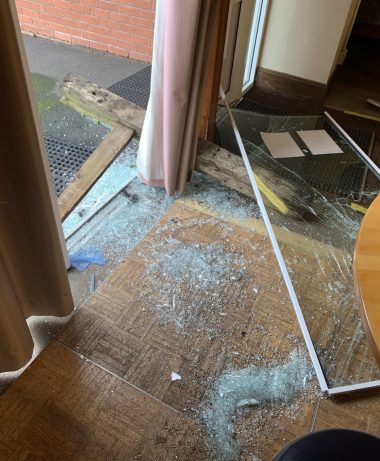 “This seemed pre-meditated to me – I don’t know where they got the piece of wood from and the intention did not seem to be burglary as the locks on the doors inside were intact and the bar area was untouched.

The security is going to be reviewed at the site to see what measures could be put in place to deter future attacks.

The site is currently closed because of Covid-19 but will be looking to reopen in the coming weeks when the restrictions ease.

Usually it is used by Droitwich Spa FC men’s, ladies’, veterans’, boys’ and girls’ football teams, along with the boxing academy and hockey club.

This latest attack will be frustrating for users as the venue has been earmarked for a massive revamp and currently is part of a fund-raising drive to create a new state-of-the-art sports hub for the town.

Police were called to the pavilion on Saturday and Sunday morning and said an attempted break-in to the boxing club between yesterday and this morning.

Sgt Sarah Kent said: “We will be stepping up patrols in the area and are asking any members of the public who use the field to report anything suspicious that they see.”