THE SANTA sleigh operated by Droitwich Spa’s Rotary and Lions clubs has raised £8,000 for good causes.

The two clubs want to thank everyone who supported the 2019 seasonal scheme.

A spokesperson said: “It was wonderful that so many people, especially children, were able to meet Santa as we toured the streets of Droitwich Spa.

“It seemed that this year that there were more children than ever which is great.”

The funds will be donated to local charities throughout the coming 12 months.

The organisers said it would not have been possible to operate the sleigh without the support from other organisations and volunteers.

“With the growing town size, trying to cover all roads is an increasing challenge hence why we now start in November.

“Whilst the weather was not as extreme as we have had some years, rain did stop us going out some evenings or caused early finishes when Santa was becoming soaked.”

He thanked the people of Droitwich for bearing with the clubs when changes had to be made and apologised they were not able to cover every road. 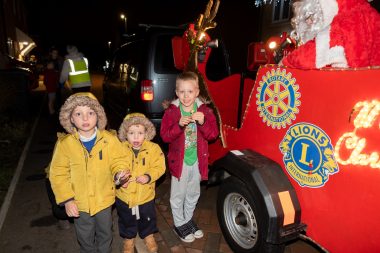 Arrangements are already being made for Christmas 2020 with some changes to routes to better balance the roads covered and so the man in the big red suit can reach children before bedtime.

The clubs are already looking for any organisations in the town which feel they could help on at least three evenings to get in touch.