Can you help? - Friends of Droitwich Railway Station's improvement work gets under way

WORK has started by The Friends of Droitwich Railway Station to enhance the part of the town first experienced by visitors coming in by train.

The group was formed in May and has adopted the station in conjunction with West Midlands Railway.

It began by transforming the ticket office and entrance where there were some existing concrete flower beds – they have been dug out and refilled with fresh soil and new plants – kindly donated by Webbs of Wychbold – have been put in. 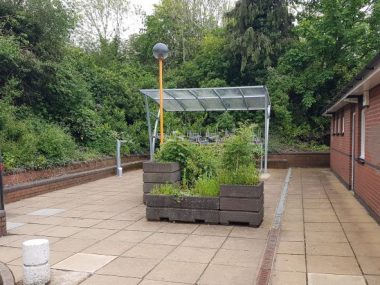 Most of the site has also been litter-picked to get rid of unsightly rubbish.

Martin Jones from the Friends group said: “We’ve received lots of positive comments on the area we’ve done so far from both the railway staff and travelling public.

“When we’ve been working at the station people come along and say how nice it looks.”

The group wants to get community groups and local schools involved in the development of the station.

Martin added: “As a group we’ve been doing a lot of background work writing a constitution, organising a bank account and planning for the future.

“We are looking for enthusiastic volunteers who can spare a few hours a week to help with our work at the station, we also try and incorporate a social activity with our monthly meetings at a local public house.

“As well as looking for volunteers we are keen to entice local companies to come on board with sponsorship for new planters and artwork that we wish to purchase and display on the station platforms.”

Anyone wanting to support the group or volunteer can email h.s.jones@talk21.com or leave their details with the station staff in the booking hall kiosk.