Classic 9to5 - The Musical under way at Droitwich's Norbury Theatre

A CLASSIC toe-tapping musical guaranteeing to start the blood pumping and a cup of ambition is under way at Droitwich’s Norbury Theatre. 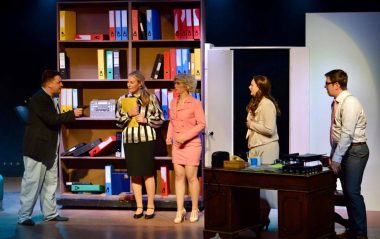 The first show of 9to5, by the Norbury Players and featuring songs by Dolly Parton, took place last night with the next performances at 7.30pm this evening, tomorrow night and on Saturday. The second run will be at 7.30pm next Wednesday to Saturday, October 20, 21, 22 and 23.

The production is based on the 20th Century Fox picture originally produced on Broadway by Robert Greenblatt, April 2009.

Brought to you by the same creative team of the Norbury’s 2016 sell out musical, ‘Sister Act’, 9to5 – The Musical tells the story of Doralee, Violet and Judy – three workmates pushed to boiling point by their sexist and egotistical boss, Franklin Hart Jnr.

Concocting a plan to kidnap and turn the tables on their despicable supervisor, will the ladies manage to reform their office – or will events unravel when the CEO pays an unexpected visit?

Appeal for volunteers to help out at weekly Droitwich Friendship Group