A WOMAN whose life was saved at the Alexandra Hospital after she contracted Covid has called on the Government to up its pay offer to nurses.

Maria Hodgetts spent six weeks in the hospital after finding herself struggling to breathe in January.

She underwent various treatments from being given antibodies to having intensive continuous positive airway pressure machines blow forceful blasts of air into her lungs to keep them open. 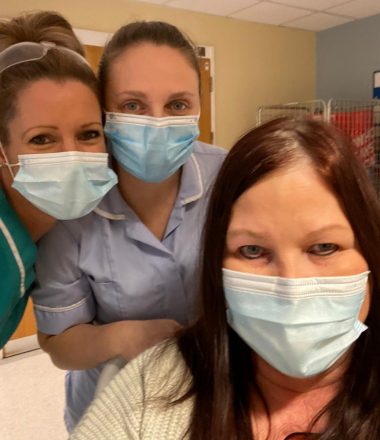 She said: “It was also the mental aspect as well as the medical treatments that get you through and the staff were great with that as well.

“The hospital was rammed and even though they had so many patients, they made sure they spoke to you to keep you feeling positive about your recovery.

“They are dealing with the patients’ mental health as well as their own and many will probably need post traumatic stress disorder counselling for what they have been through.

“I saw things on the wards I never thought I would see in my life – I’m home now but they are still there putting their lives on the line every day.

“Many of them had volunteered to work on the Covid wards and were putting themselves at risk for the good of the patients.

“They have also had to improvise to find the right treatments for each patient as the knowledge of the virus was changing all the time.”

Maria, from Lickey End, labelled the Government’s one per cent pay increase offer as ‘disgusting’ and said their current wages were also being eaten into by the hospital car parking charges.

“A lot of us wouldn’t step into their shoes and do that job – they deserve so much more.”

The former Bromsgrove, Droitwich and Redditch Standard sales representative is now back home but still has a lengthy recovery ahead.

“I have long Covid but I’m grateful I’m here to have that – they saved my life.

“It could have been a lot worse had it not been for the staff.”

The Government said, because of the cost of the pandemic, one per cent NHS pay rise is all it can afford.