Police received reports of the attack at 7pm by four youths and said it appeared the structure had been kicked.

Sgt Sarah Kent confirmed officers were investigating the incident and were liaising with other agencies to see how lighting and security around the seating area could be improved. 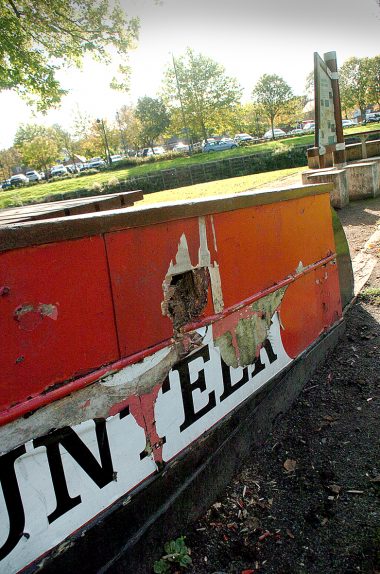 Once again the Wyche Barge has been damaged. Picture by Marcus Mingins 4319010MMR2

The vandalism was lambasted by Wychavon District Council.

Jonathan Hulbert, the authority’s Senior Parks and Greenspace Officer, said: “It is extremely disappointing that this iconic Droitwich landmark is continually targeted by vandals.

“The overall damage is too much to repair, therefore, we are aiming to rebuild it completely by the end of March next year.

“The new structure will be more substantial, as well as easier and cheaper to repair.”

The last time the Wych Barge was vandalised last August when the perpetrators caused thousands of pounds worth of damage.

The history of Droitwich’s Wych Barge

The replica Wych Barge was officially launched on April 14, 2007, by then Mid Worcestershire MP Peter Luff who described unveiling it as ‘one of his best days in his 15 years as the area’s Member of Parliament’.

It was created as part of the restoration of the town’s canals to link two of the most important aspects of Droitwich history, salt and the waterways.

The project was made possible thanks to a £50,000 grant from ITV’s The People’s Lottery which was determined by a television viewers’ vote.

The barge, installed by volunteers, had the dimensions of an original Wych Barge, boats built to transport salt from Droitwich to sea ports.

The structure was then revamped by Wychavon District Council in 2011 to celebrate the restoration of the canals.