WORK on Droitwich’s new community hub has been completed and will be officially launched in the spring.

The Cabin is intended for a number of uses, including hosting adult education programmes, community and family information events and meetings organised by the police, social care workers, special needs groups, the health service and other local organisations. 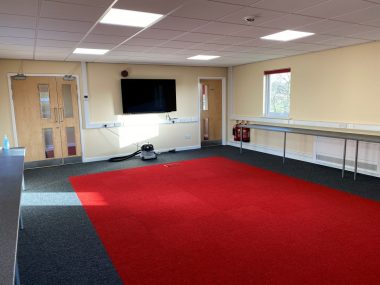 Construction of the hub was able to take place after a joint bid by Droitwich Spa Town Council (DSTC), Droitwich Means Business (DMB) and Droitwich Spa High School (DSHS) for a share of the Wychavon’s Community Legacy Grant scheme, resulting in £120,000 funding for the project.

But the grant was on condition the community rallied round to raise more funding for the Cabin, which is based on the Droitwich Spa High School site.

Matt Nicol, chair of Droitwich Means Business and a former Droitwich Spa High pupil, said it had been a truly great community effort.

Cash was raised and donated by a range of local organisations including King George V CIC Sports Association, which gave £5,000, Mr Nicol’s estate agency Nicol and Co donated £3,000 and fund-raising by Droitwich High School brought in a further £7,500.

Matt Nicol said: “The initial suggestion was for a shed, but we all agreed ‘The Cabin’ sounded better.

“It could never have been completed without everyone pulling together in what has been an incredibly challenging year with the pandemic to contend with as well.”

The Cabin, now completed, will be managed by a committee of six including two representatives from DSHS and DSTC.

Droitwich Means Business, made up of local key company owners, employers and business leaders, was co-founded by Mr Nicol to put the town on the map and create a connected community.

Mr Nicol, who has now been invited to be a member of the DSHS Academy Trust, said he was deeply touched by the gesture.

“When I was a pupil at the school, I never imagined I would be honoured in this way and am very pleased to accept the school board’s kind invitation.”