THE SOCIALLY distanced three-day Vines Park Community Market held in place of Salt Fest over the weekend has been hailed a great success.

Families, friends and couples flocked to the event on Friday, Saturday and Sunday and those gathered followed the guidelines to keep everyone safe.

Attendees were praised by Gardeners Arms landlord Simon Berry who organised the event with LSD Promotions. 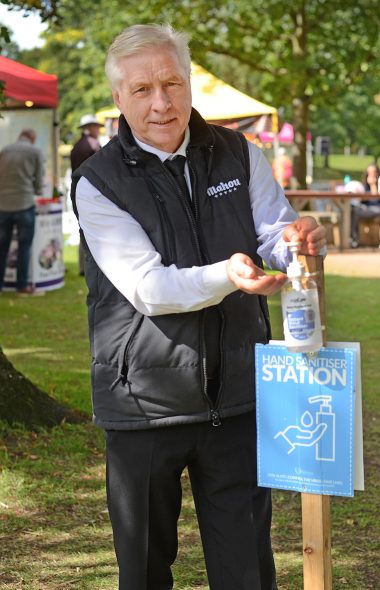 It was supported by Wychavon District Council which supplied stewards to enforce social-distancing measures and asked people to wear masks. There were also hand sanitiser stations around the park for visitors to use.

Mr Berry said: “It went very well and it provided a much-needed boost for the businesses which had stalls after a very difficult time financially.

“It alsoshows what can be achieved within the restrictions.”

There were 50 stalls in total, offering local food and drink, and visitors bought the fare on offer to picnic in the park.

Artist Rosie Philpott, who had a stall, said she was overwhelmed by the number of people who came to support the market.

“It was lovely to interact with customers again.

“I was able to allow customers to view my artwork from a safe distance. I also provided and encouraged the use of hand gel and wore a face shield. I felt very safe throughout.

“There were festival officers on every entrance reminding people about social distancing, hand sanitising stations all around and even baskets on the picnic tables containing disinfectant spray and paper towels.

She thanked LSD Promotions and Mr Berry and said: “It was humbling to witness the community spirit – it hasn’t gone.”

Coun Richard Morris, who is responsible for economy and tourism on Wychavon District Council, said: “There were people of all ages in there, including older and vulnerable visitors who needed to get out after the past few months.

“It was a brave move as it’s difficult to put any event on at this time.

“It was also much-needed for the sake of people’s mental health and shows if events like this are well organised people will come.”

MP Nigel Huddleston, who went along on Saturday, said: “It was wonderful to see lots of people enjoying themselves – and the food and drink – in a socially distanced manner.

“Thanks to all those who organised and staged the event and it’s just another example of how brilliant the locals have been at adapting to the current circumstances.”