HUNDREDS of Droitwich residents gathered in Victoria Square this morning to pay their respects on Remembrance Sunday.

While last year’s record attendance marked the centenary of the end of the First World War, this year’s event commemorated the 75th anniversary of the D-Day landings. 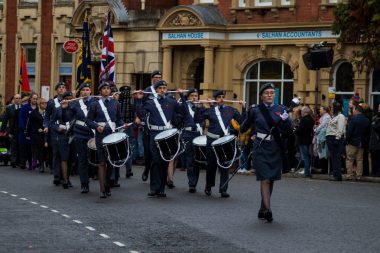 The parade, organised by the town’s Royal British Legion, gathered outside Westcroft pub on Ombersley Street at 10.15am.

They moved towards the war memorial slightly later than planned, at around 10.35, for a traditional service led by Rev Nigel Byard.

From there the Salvation Army Band played to the crowd while they sang hymns.

At 11am the crowd fell silent for two minutes to remember those who lost their lives during the Great War and in other conflicts.

The chimes of Big Ben were relayed through speakers.

Wreaths were laid by representatives from several local charities, businesses and organisations, including Mayor of Droitwich Spa Coun Bill Moy.

Rev Nigel Byard, who spoke at a second service inside St Andrew’s Church, said: “As we remember the sacrifice made by those who went before us we must try to continue the peace.

“We will remember them.” 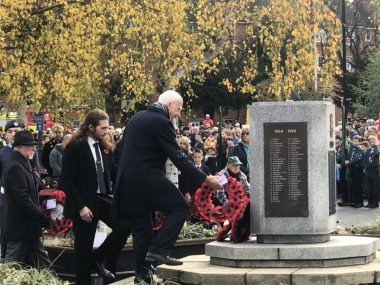 Bromsgrove veteran Albert Malin, 93, told the Standard that he was just 17 when he helped load injured troops and German prisoners onto landing crafts while serving in the Royal Navy during the Second World War.

“We didn’t actually visit the beach but we came very close and it was extremely dangerous.

“While we were loading up soldiers to take them back to English shores, we were constantly under-fire from warships and aircrafts going over our heads.”

Mr Malin recently received his prestigious Légion d’Honneur medal from the French government for his part in the D-Day landings.

Tomorrow (November 11) at 10.45am a short service will be held at the war memorial to commemorate Armistice Day.