THE POLICE and fire service carried out a special operation to highlight the dangers of drivers putting themselves and crews at risk by ignoring warning lights outside the town’s fire station, writes Eve Watson.

The wig wag light system is designed to bring vehicles on the road outside the station to a halt which allows fire appliances to make a safe exit onto the road. 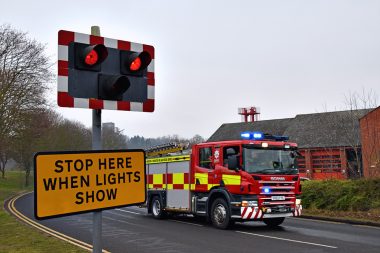 Fire engines have to wait on the station forecourt for drivers who have ignored the warning lights to drive by, slowing down the response times for an emergency call-out.

An amber light warns of impending activity and two flashing red lights mean that all vehicles should stop.

Over the last five years, there have been an average of more than 900 call outs each year from Droitwich Fire Station and if the lights are ignored, each one could be a potential hazard.

And when Sgt Sarah Kent joined Droitwich Station Commander Gareth Clarke at the fire station on Thursday for a ‘mock-up’ test to see what drivers’ reactions would be, one drove straight through ignoring the warnings (pictured below). 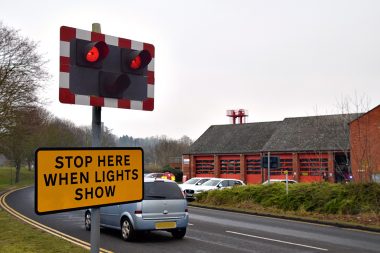 Mr Clarke said: “We are concerned that drivers are putting themselves and our firefighters at risk and slowing down our crews attending emergencies.

“Our fire appliances have cameras on board so can capture footage of cars which neglect to stop at the lights and that could be passed on to the police.”

Sgt Kent said: “Road traffic signals are in place for the benefit of all road users.

“We want every road user to remember that the lights outside a fire station should be adhered to.

“When the lights are on red outside the station cars need to stop to allow fire engines to depart the station safely and get to the incident they are responding to as quickly as possible.”

Motorists caught failing to follow the system will face a fine, points on their licence, a court appearance or being required to take a training course.