FOUR PEOPLE have been taken to hospital following the seven-vehicle crash on the M5 this morning.

The incident, on the northbound carriageway in between Junction 6 (Worcester) and Junction 5 (Droitwich), involved a lorry, which spilled its load, a van and five cars. 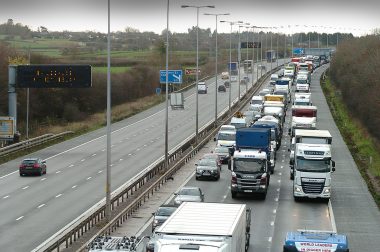 Chaos came to the M5 after a lorry shed its load. Picture by Marcus Mingins 4918011MMR www.buyphotos247.com

Picture by Michael Cadman from HWFRS. sTwo of the drivers had to be cut from their cars by the fire service which sent six fire crews and two officers to the collision.

In total eight patients were assessed by ambulance staff – four were discharged at the scene while the other four – three men and a woman – were taken to the Worcestershire Royal Hospital for further assessment and treatment.

Four ambulances, a paramedic officer and a BASICS doctor were sent to the scene by West Midlands Ambulance Service.

The northbound carriageway was shut while the emergency services worked at the scene and two lanes southbound were also closed.

Both carriageways have now fully reopened.

Michael Cadman from Hereford and Worcester Fire and Rescue Service praised the ‘significant effort by all agencies which reduced the impact on the community and meant there were no significant casualties.

“Thank you for your patience whilst this was dealt with,” he added.