MORE than 200 bags of rubbish have been collected by the Droitwich Spa Litter Squad as part of its Big September Clean.

The group targeted several areas of the town, including the A38 Roman Way bypass on three occasions and the Westlands estate on September 13. 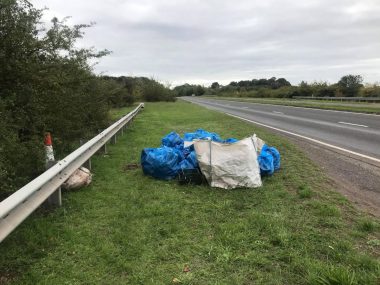 As well as the group’s litterpicks, the group’s Facebook, which now has more than 170 members, and has been flooded with updates almost daily about residents rolling up their sleeves and carrying out their own rubbish collections to tidy up their local areas.

Clive Shearman, who launched the Droitwich Spa Litter Squad, thanked everyone for their efforts and said: “We are starting to notice how much tidier the A38 is now.

“It used to be a poor advert for anybody of our lovely town.”

For more information on the Droitwich Spa Litter Squad check out the group’s Facebook page.

The Great British September Clean was also backed by Wychavon District Council which has launched its Adopt a Street scheme.

It sees people volunteer to help clean their own local areas.

Go to wychavon.gov.uk/adopt-a-street to sign up to the scheme.

Click here for more information on the Droitwich Spa Litter Squad or to join the ranks.