Have your say on plans for Droitwich's Raven Hotel, which include housing, new brine baths and a gin bar

DROITWICH residents are urged to have their say on the latest planning application for the town’s historic Raven Hotel which will include homes, a new brine baths and a gin bar.

The developers have submitted proposals to Wychavon District Council and comments must be received by Monday, March 14.

The plans will see the timber frame core buildings retained and they will incorporate nine private one-bedroom flats.

The newer parts of the site will be demolished to make way for 49 houses.

Uncovered tree-ring dating has recently shown these core buildings go back to the mid 1400s so they are among the oldest in Droitwich.

Despite removal of some walls in the Victorian redevelopment, the substantial timber frames are in relatively good condition – a tribute to how well they were constructed all those years ago.

Droitwich Preservation Trust has submitted an objection to the planning application because its trustees believe the historic structures should be used for community purposes so residents and visitors will be able to see the impressive evidence of the town’s past. 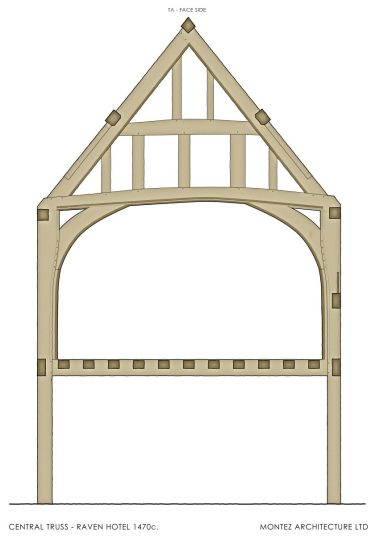 A drawing of the conjectural central truss, based upon primary evidence and surviving timbers. Picture by Montez Architecture Ltd. s

The Trust is a grant-making charity which supports the restoration and preservation of publicly accessible buildings in Worcestershire.

Having already been involved in recent discussions with the owner and town and district councils to offer its support, its trustees believe the core Raven buildings should be preserved and restored for public access.

The trust proposes to set up a new charity for this purpose with help from other interested parties and would be a key stakeholder in the project.

It added it welcomed the proposal in the planning application to demolish most of the later additions – which had fallen victim to vandalism and were now potentially unsafe – to create new homes.

It added the only change it would make to the application would be to ensure the ‘outstanding quality timber frame core buildings’ remained accessible for the local community and visitors to the town.

A spokesperson added: “We fully appreciate the understanding and working relationship we have with the owner and architect in preserving the historical importance of the timber frame.”

Visit plan.wychavon.gov.uk/Planning/Display/20/02623/FUL to see the plans and to comment on the application.