A MAN with a history of violence has been found guilty of brutally murdering Droitwich pensioner Desmond Wooding.

Adam Mason, aged 33, of Plough Lane, Tibberton, stabbed the 80-year-old 11 times in his neck and chest at his Vines Lanes address on June 23 last year.

Neither the murder weapon or the clothes he wore that day have ever been found by police.

The jury at Worcester Crown Court deliberated for three days before reaching their verdict.

They also found Mason’s uncle, Mark Mason, guilty of assisting his nephew after driving him away from the scene.

Mr Wooding, who was found dead in his living room on June 24, had married Maureen who was the sister of Adam Mason’s grandad, Colin.

The prosecution told the jury that the Mason family did not get on with Mr Wooding because he treated Maureen badly, up until her death in 2013.

Adam Mason drank 13 pints and several glasses of whiskey at the Gardeners Arms pub on Vines Lane before the frenzied stabbing, which was understood to have happened just before 9pm.

He then went missing for around 20 minutes before returning to the pub to use the toilet.

It was during this window that police say an argument ensued between Mason and Mr Wooding and the violent attack occurred. 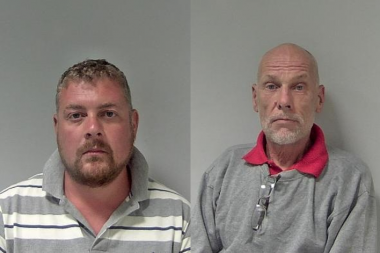 During the three-week trial, the jury heard from a forensic scientist who found Mr Wooding’s DNA on Mason’s dog lead.

Mason’s defence tried to argue that the DNA was picked up off the street when Mason was walking his dog near to the pensioner’s home.

Giving evidence, Detective Constable Robert Loach told the jury that there are two cameras at either end of Vines Lane and that anyone who visited the road would be picked up by one of those cameras.

He said he had gone through more than 10 hours of CCTV footage as part of the process of eliminating potential suspects for the murder.

He said that Mason was the only person unaccounted for.

Days after the brutal killing, Mason went on holiday with his girlfriend.

He was arrested at Birmingham Airport on his return to the UK and told officers he had lost his phone and bank cards while in Tenerife.

In the following days Mason changed his story several times during police interviews.

He said he went straight home after being picked by his uncle on June 23 but CCTV tracked the pair to an isolated area near Droitwich.

They later told police that they were taking their dogs for a walk.

Detective Inspector Mark Walters of West Mercia Police said: “This was a cold and brutal crime for which Adam Mason has never shown any remorse.

“Adam Mason is clearly a dangerous individual and his conviction today will ensure he faces the justice which the nature of the crime merits.

“Mark Mason did everything he could to assist his nephew to cover his tracks and prevent him being detected.

“Our thoughts at this time are with the family and friends of Mr Wooding.”

Both Masons will be sentenced on March 25 at Worcester Crown Court.