‘THE CANALS could provide the perfect ready made car-free transport network between Bromsgrove and Worcester’ – that’s the view of a cyclist who commuted between the town and the Faithful City when he was based there.

And Darren Mansell is calling on some of the cash made available to improve cycle routes to invest in tow paths, making them smoother for bikes and wider for added safety.

He said: “We have the M5 and the A38 and both routes are always busy – you can sit for ages in traffic, even more so if the motorway shut.

“When I did my commute it used to take me 45 minutes to do the 13 mile journey and most days that would be a lot quicker if you got caught in traffic on one of the main roads.”

Darren, an IT consultant from the Oakalls, now works from home but says he feels the quicker solution craved by many commuters could easily be found with a bit of investment.

“The canals provided the original transport infrastructure and the tow paths could have a similar impact today.”

He said among the canal-sides which would need the most work were the ones from Stoke Prior and around Droitwich.

“When I decided to use that route I had to get myself a mountain bike to safely negotiate the terrain.

“I’m by no means a supporter of this Government but I think what they are doing by investing in cycle routes is definitely a step in the right direction.”

He added the UK should take a leaf out of the continent’s book. He has cycled in both France and the Netherlands where he said the bike routes were far better than they were here.

“I cycled from London to Paris and the segregated Avenue Vert cycle route from Dieppe to the French capital is absolutely amazing.” 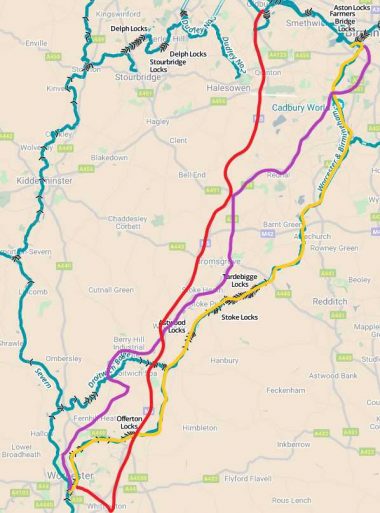 The M5 is in red, the A38 is in purple and the canal route is in yellow.

In October we reported on a scheme presented to the town council by Richard Waltier from Droitwich Means Business to make the Spa the ‘healthiest town in the UK’.

As part of the plans to get people more active, it was suggested the canal tow path surfaces be improved and the canal-sides widened.

After speaking to Darren, Alan Amos at the County Council told the Standard:“Together with our partners we have submitted our bid for more than a million pounds from the Government’s Emergency Active Travel Scheme.

“And we will be investing further in to the 34 schemes that are set out in our Local Transport Plan (LTP).”

The cabinet member with responsibility for highways added that the LPT outlines plans for an active corridor and improved walking and cycling route from Worcester to Droitwich.

“We are committed to delivering once funding becomes available.”