The striking blue summer sky coffin, reflecting Helga’s ever-optimistic character, was led into the church to a poignant cover version of The Beatles’ Golden Slumbers as the ceremony – led by Minister Angela Kovacevic – got under way.

A tribute read out from Helga’s family in Belgium, including her two brothers and dad, sited her as being ‘determined from a very young age’.

It talked about how she met her ‘knight in shining armour’ playing online game ‘The Dark Age of Camelot’ which led her to ‘follow her heart to England’.

Words given by her (in their words) ‘ridiculously large group of friends’ described her a ‘truly inspirational’ person who had a massive smile which radiated from her heart and left an impression on everyone she met. 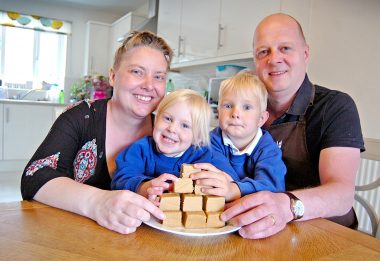 She was always positive even when she was diagnosed with her illness, saying: “It is what it is” and “It’s the way the cookie crumbles.”

Helga was a wonderful mum who was so proud of her children and loved bringing people together.

She started Wychbold’s main networking group and countless others and would always organise social get-togethers – both nights out and ‘girls’ nights in’ – which inevitably involved gin, prosecco, popcorn and, of course, fudge.

She was feisty, lively and full of fun and ‘always the first on the dancefloor’ with her friends ‘not being able to get her off it during 1980s and 90s themed nights’.

Helga was easy-going, always organised, a capable problem-solver and a true leader, added the friends’ tribute.

When she was diagnosed she was always there for the other women in the cancer support group she joined.

She ‘looked stunning’ when she took to the catwalk in the group’s charity fashion show that she encouraged others to join her in doing.

“Heaven has got its ultimate angel.”

Her popularity was echoed by another friend who spoke and concluded her personal tribute with: “We should not mourn that Helga’s life was short but celebrate that we were part of her short life.”

Moving words from son Brennan which were read out remembered mummy as a very kind lady who was both ‘fun and funny’ and always offered ‘warm cuddles’.

“I will miss mummy and everything she did.”

And husband Justin said Helga brought people together because she wanted to be belong to a community which helped each other and one she felt proud to be part of.

He said because of her positive influence, the children were ‘beautiful, spirited, full of life, laughter and love, along with kindness, intelligence, courage and a wicked sense of humour’.

Prayers were said by Rev Canon Wyn Beynon and hymns included Amazing Grace and Lord of the Dance.

The last song before the committal and burial was not revealed in the order of service and when the first notes of Toploader’s Dancing in the Moonlight sounded out there were giggles throughout the beautiful church.

After the coffin was lowered into the grave, friends and family members placed flowers on it and Brennan and Seren released two balloons – one red and one pink – into the summer sky as the sun shone down.

As people left, many spoke to each other about the great times and of how Helga was always full of fun, joy and laughter.