THE POLICE cordon on Vines Lane in Droitwich remains in place this evening as officers continue their enquiries into the death of a man in his 80s.

The pensioner was found at an address at 8.20am this morning and his death is being treated as ‘unexplained’.

The Standard has received calls from residents concerned about the incident and the ongoing police presence.

Det Ch Insp Carl Moore of West Mercia Police said: “Officers remain in attendance on Vines Lane, Droitwich, following the death of a man in his 80s, which is currently being treated as unexplained.

“A police cordon is in place and enquiries are ongoing to establish the circumstances.

“At this time, there is nothing to suggest a wider risk to the community.”

He urged anyone with any concerns to speak to local police officers. 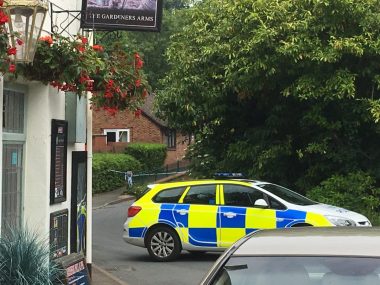 Calls were made to the police and ambulance service this morning after concerns were raised for the wellbeing of a man at an address in the street.

A West Midlands Ambulance Service spokesperson confirmed an ambulance and paramedic officer had been sent to the scene.

He said: “When our crew arrived it became quickly apparent nothing could be done to save him and he was pronounced dead at the scene.

A West Mercia Police spokesperson said the death was being treated as unexplained.

On witness said: “The emergency services were everywhere – there were police cars, a police van, an ambulance and a ambulance car.”