PUPILS and staff at Hanbury C of E First School took part in a day of activities for much-loved headteacher Andrew Payne who is retiring after 14 years at the helm and even longer in education. 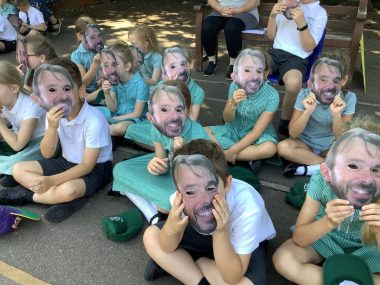 The children led the special celebration which began with him being greeted – thanks to some printed face masks – by a playground full of Mr Paynes.

Years two, three and four then read their memories of Mr Payne, ranging from how he helped them climb trees or play cricket to how he sometimes needs a gentle reminder to tuck his shirt in or ensure his mask is completely over his nose.

During a special assembly, Mr Payne received a number of awards, including ‘Best Supporting Actor in a Pantomime’, after becoming famous for being called upon stage whenever there is a trip to see some Christmas theatre.

He was also handed the sought-after titles of ‘Most Enthusiastic Ukulele Teacher’ as he loved joining year three music lessons and the unenvious ‘Best Toilet Unblocker’.

Children from reception and year one then gave him some interesting advice and ideas of things to do after thinking long and hard about what ‘retirement’ meant.

Each class had made a card for Mr Payne, which they took turns to present to the day’s guest of honour.

And, in a final surprise, the school performed him a leaving song to the tune of Three Lions.

The head enjoyed that so much, an encore was requested and performed.

The celebration was concluded with a special prayer summing up how special the school was to everyone.

A Hanbury First School spokesperson said: “Mr Payne said it was a day he would remember forever.

“We were thrilled to send him on his way with such a special send off.”