“WE’RE not here to make up the numbers, we’re here to make a name in Step Six.” That’s the pledge from Droitwich Spa manager Andy Crowther ahead of the club’s first game of the season.

Spa open their campaign away to Chelmsley Town on Saturday in the Midlands Football League Division One – the highest tier the club has played at in its history after last term’s promotion as the West Midlands (Regional) League champions.

And it looks set to be an exciting season. The Saltmen will also ‘come home’ and be able to play back in the town on their new stadia pitch. But with their first two matches away, they will have to wait until August 16 when they host Cradley Town. 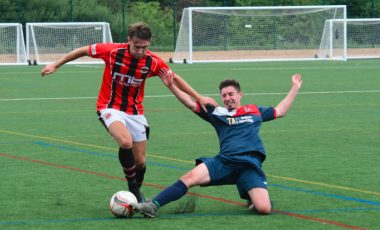 Crowther said: “We can’t wait – playing under the lights in a ground which is ours is going to be amazing.

“It’s what Droitwich and its community have needed for years.”

Crowther, who also played for Droitwich from the age of 16, is upbeat about the new season.

“I spoke to the lads and said we have not come here to finish mid-table or consolidate,” he said. “There are play-offs in this division and I’m confident we can be in or around them.”

The Saltmen have retained every one of their title-winning side and Crowther has added some new faces.

Among them is central midfielder Matt Tyler who had the experience of being at Worcester Raiders when they won the West Midlands League. 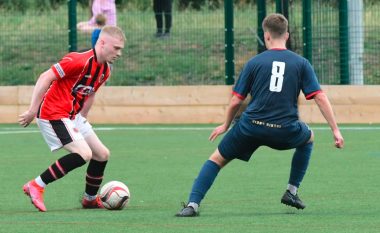 Ben Cowlishaw. who was the second highest scorer last season behind Droitwich’s Connor Collins, has joined from Bromyard Town.

The Saltmen’s attacking prowess was demonstrated in the recent 8-0 demolition of Gornal Colts in a pre-season friendly.

Crowther added: “It didn’t surprise me than no-one left – everyone is enjoying this journey Droitwich is embarking on. We’ve got real strength in depth which is needed at this level when you’re playing 40 plus games-a-season.”

My best years will be with the Pears promises Hose