A HARD-FOUGHT 3-2 win away to Wellington Amateurs ensured Droitwich Spa maintained their unbeaten run and their place at the top of the West Midlands (Regional) League Division One table.

Gornal Athletic kept up the pressure on The Saltmen after beating Sikh Hunters 2-0 – they are one point behind the leaders and still have a game in hand. 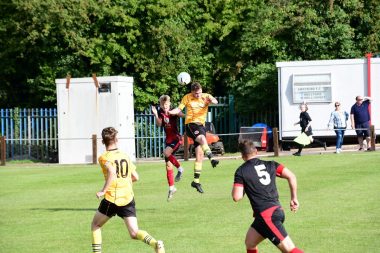 Saturday’s game was seemingly guaranteed goals with the last two matches between Wellington and Droitwich ending 3-3 and 4-5.

And that proved to be the case with Wellington going in front early on before Connor Collins levelled with a 20-yard free-kick.

Collins, supplied by Connor Baker, grabbed his second and sent the Saltmen in front before Wellington equalised.

Jack Davies replaced Collins before he could claim the match ball and it was Luke Molloy who fired home to give Spa another win.

Another test awaits Droitwich on Saturday, September 25, when they travel to fourth-placed Wrens Nest.

The opponents have won three and drawn two out of the seven games they have played and have had an indifferent start to the campaign at home with one win, one draw and a defeat. Kick off is 3pm.