A GOAL-FEST in Telford went the way of Droitwich Spa who edged a 5-4 thriller against nine-man Wellington Amateurs in West Midlands (Regional) League Division One last weekend.

With a meeting with Wyrley on the cards this Saturday (3pm) at Walshes Meadow, Spa demonstrated their scoring prowess ahead of their latest challenge with a fine attacking display – albeit against a Wellington side that suffered badly from indiscipline.

Jordan Cox got the visitors up and running four minutes in after cutting in from the left flank and blasting into the far corner of the net, with Jack Davies bolstering the lead eight minutes later from close range. 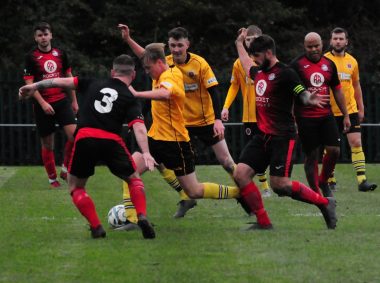 While Amateurs’ William Wells netted a debut goal to reduce the deficit on 21 minutes, the dismissal of Marc Perry and subsequent penalty scored by Cox just seconds later made it an uphill battle for the hosts once more.

The Saltmen took a firm grip of proceedings and added their fourth before the break, no less than a wonder goal to wrap up Cox’s hat-trick.

Receiving possession on the edge of the penalty area, he flicked the ball over his marker before slamming a volley into the roof of Charlie Baker’s net.

While Spa looked to be sailing towards victory, a nine-minute spell after the restart that resulted in three Wellington goals was completely off the script.

Wells’ second on 52 minutes was followed by a three-minute brace by Matt Elsmore around the hour mark. 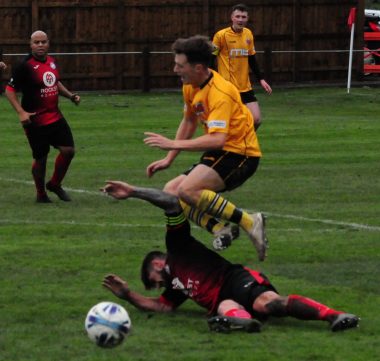 There were plenty of full-blooded challenges throughout the game. Picture by Mathew Mason.

Unfortunately for the hosts, the dismissal of the latter for a second yellow with 20 minutes remaining helped turn the tide of the game, as Davies won the day with a 25-yard stunner into the top corner.

A late save from a Cox penalty denied the forward a fourth and Droitwich a sixth, although the visitors were able to secure the three points regardless.