A GROUP from Bromsgrove undertook their gruelling 25-mile walk of the iconic 144 bus route on Sunday, smashing their fund-raising target for Cure Parkinson’s.

The Stoke Prior-based Taps UK workmates Sophia Harley, Bryony Billingham, Millie K, James Higgs, Lydia Owen and Jake Kendall, along with Becki Harley who works at the One Stop Shop, began at Smallbrook Queensway in Birmingham at 9am. 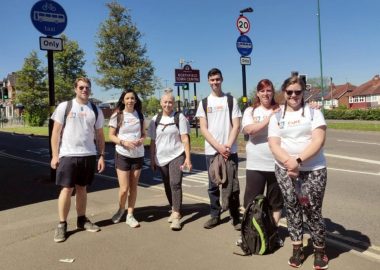 Four of them made it all the way to Worcester by 8pm and had a well-earned meal at the Burger Shop Arch, The other three made it to Droitwich, Webbs in Wychbod and Sidemoor respectively.

Sophia, who organised the trek, said: “It took us around 11 hours and it was the hardest thing I’ve ever done but it was absolutely incredible – I’m so proud of all of us.

“The heat was unbearable and some of us had horrific sunburn. 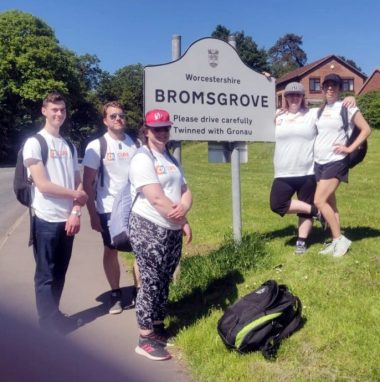 “But thankfully, because of the amount of training we’d done beforehand, we just had a few blisters and didn’t ache the morning after.”

She thanked everyone who had given so generously, Market Cars for a complimentary taxi home, First Worcester which runs the 144 and donated £250 and the Standard for our support in publicising the event.

Anyone wanting to boost the group’s fund-raising further can visit justgiving.com/team/team144 and donate there.

The walk was organised as part of the £1,000 challenge anyone wanting to set up their own can go to cureparkinsons.org.uk to find out more.