A MURDER investigation has been launched after an 80-year-old man was found dead at his home in Vines Lane, Droitwich.

Desmond Wooding, who had suffered stab wounds, was discovered around 8am on Monday after concerns were raised for his welfare.

The last time he was seen alive was on Sunday evening when he was near to his house on his mobility scooter.

Desmond was well known in the neighbourhood and in Droitwich town centre where he was regularly seen on his scooter.

Police yesterday issued CCTV footage of a man they want to speak to in connection with the death as officers believe he may have information vital to their investigation. He was seen walking his dog in the area last weekend, specifically around 11.30am last Saturday.

Supt Damian Pettit, who is leading the Droitwich area policing team, said: “We recognise this is a shocking incident for the local community, but incidents such as these are thankfully rare, and our thoughts remain with Desmond’s family and friends at this time.

“Anyone with any concerns can speak to a member of my team, as we remain in the area carrying out our enquiries.

“This investigation is being led by our Major Crime Investigation team, and I would like to reassure the community that finding out who is responsible for this crime is our upmost priority.”

Supt Damian Pettit appealed to the public to come forward (below).

Det Ch Insp Carl Moore said: “This is a tragic case, where an elderly gentleman has been killed in his own home.”

He urged anyone who was in Droitwich last weekend to think about what they were doing and whether or not they saw or heard anything suspicious.

And he added police were anxious to speak to the man in the images and video footage. 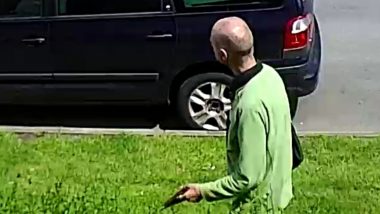 One Vines Lane resident told The Standard: “Everybody here in the lane is shocked this could have happened so close to where we live.

“There has always been such a lovely sense of community here and this is so out of character with our quiet Worcestershire street.”

Anyone with any information on this incident should call West Mercia Police on 101 or call Crimestoppers on 0800 555 111 or convey information at www.mipp.police.uk.