THE MAYFLOWER ghost ship created in Droitwich to celebrate 400 years of the vessel reaching Cape Cod will be lit up every night between now and December 26.

The creation of the quarter size model at the Netherwich Basin in Vines Park also marks the signing of the famous compact which led to the forming of America’s constitution. 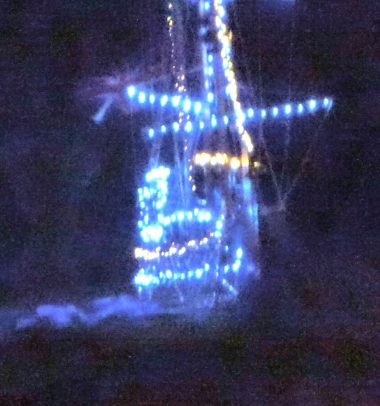 The town has strong links to the voyage, which began on September 16, 1620 – on board was Edward Winslow who was born in Droitwich in 1595, baptised at St Peters Church and attended King’s School at Worcester Cathedral.

He was classed as one of the most influential of the Pilgrim Fathers, became an ambassador to the Native Americans and was a New World leader and high level civil servant working for Oliver Cromwell.

The Mayflower itself was 100ft long and 25ft wide and capable of carrying 180 tonnes of cargo.

There were 103 passengers (half were Pilgrims) also squeezed onto the vessel. 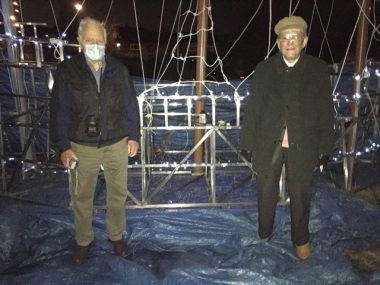 A low-key lighting up ceremony was held on Saturday with only those involved in the ship’s construction present.

All were in groups of two and remained ten metres apart.

The lights will remain on until December 26 because that was the date the Pilgrim Fathers set foot on their chosen settlement of Plymouth, Massachusetts.