THE FOUNDERS of  Libby Mae’s Little Angels charity spread some Christmas cheer to parents and babies spending the festive season together in hospital.

Charlotte and Richard Sharratt, mum and dad to Libby Mae and Riley, were joined by auntie Sarah as they travelled 143 miles across the West Midlands in 12 hours, visiting eight hospitals and delivering hundreds of presents. 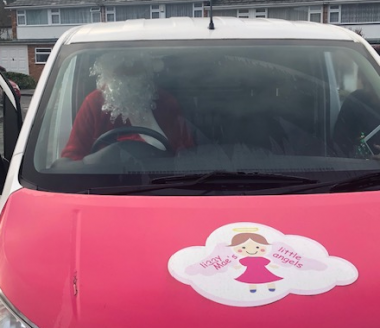 Rich and Riley we’re dressed as Santa and brought joy to many throughout the day with Rich driving the charity’s van in full Father Christmas attire.

Their route started at 9.30am on Saturday, December 21, when they left their home in Catshill and went to City Hospital, Walsall Manor, New Cross, Russell’s Hall, Good Hope, Heartlands, Birmingham Women’s and finished off with a late night trip to Worcester Royal.

The charity also provided gifts to parents and babies at Birmingham Children’s Hospital and Hereford Hospital.

This year’s gifts were very well-received with parents showing their gratitude to the charity during their visits and later via social media.

Funding for the presents was helped along by the charity’s friends and patrons Voice Mobile and Pinfields Marketing who both donated substantial amounts towards the gifts.