A MOTORIST and his teenage passenger had a miraculous escape in the early hours of this morning after a crash on the M5 involving a Ford Focus and a lorry.

It happened around 1.40am on the northbound carriageway near Junction 5 for Droitwich.

Four fire crews – two from Worcesters and one each from Bromsgrove and Droitwich – attended, along with an ambulance, two paramedic officers and a MERIT Trauma Doctor.

Paramedics worked with firefighters to free the man, who was in his 30s.

After he was released and assessed he was found to have injuries not thought to be serious and was discharged at the scene. 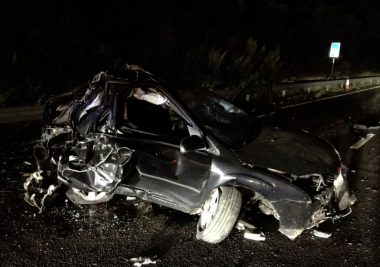 Fortunately the majority of the car’s damage was at the back of the car.

The teenager, who was in the passenger seat, suffered just minor injuries and was also released at the scene and the lorry driver was uninjured.