ONE man has been taken to hospital and three others were assessed after four-vehicle crash, including two lorries, on the M5 between Droitwich and Bromsgrove.

The incident, at 10.21am this morning saw two lorries and two cars collide which also led to a chemical spillage.

The northbound carriageway from Junction 5 to Junction 4a had to be closed while the emergency services dealt with the incident.

All lanes are now open. 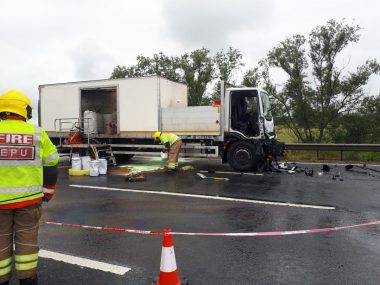 The man taken to the Worcestershire Royal Hospital was one of the lorry drivers, although his injuries are not believed to be serious.

Three other people – the second lorry driver and two who were in the cars – were assessed at the scene by paramedics and discharged.

The police and five fire crews – two from Bromsgrove and one each from Droitwich, Redditch and Evesham – were sent to the scene.

Firefighters have used absorbant pads to mop up the spillage and thermal imaging cameras to check for contamination.

A West Midlands Ambulance Service spokesman said: “The collision resulted in one of the lorries causing a chemical spillage on the carriageway which our colleagues from the fire service dealt with.”