MORE than 20 people turned out in Droitwich on Wednesday to take part in a parade for what would have been the 100th birthday of local historian Nelly Copson.

The procession began at St Andrews Church and journeyed to Nelly’s Yard Cafe where she used to live and where there is a blue plaque in her memory.

There a prayer was read by Rev Nigel Byard and messages from Royal Worcester expert Henry Sandon and June Rattlidge (Nelly’s great niece) were read out by the Mayor of Droitwich, Coun Christine Bowden. 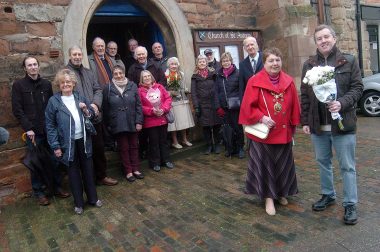 Everyone gathers before the start. Picture by Marcus Mingins 0319019MMR1 www.buyphotos247.com

Historian and author Paul Jones, who organised the parade, said: “The weather wasn’t the best but it held out while the parade took place and the prayers and messages were spoken.

“Rev Nigel Byard’s prayer for Nelly was lovely and it was a very beautiful occasion.”

There is a small exhibition detailing Nelly’s life in the Nelly Yard Cafe.

As well as being a local historian, Nelly hit the national headlines in 2000 when she became the oldest woman to be sent to a British jail over her refusal to pay business rates on her High Street home which was previously a shop. 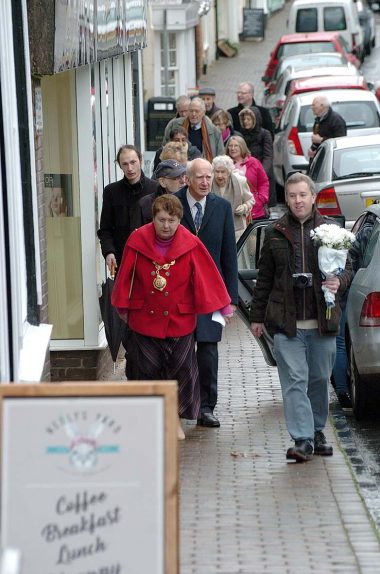 The local authority claimed 50 per cent in business rates was due but Nelly refused to pay, saying it had been vacant for a long time and was unsuitable for use as a business premises.

She was sent to the then Brockhill women’s prison in Redditch but, after a ‘Free Nelly’ campaign, only served two days.