A WAR of words has broken out over car parking charges at Droitwich Railway Station after a resident said he was wrongly fined £100.

Stuart Green is considering legal action against operator Saba which monitors the area on behalf of West Midlands Railway. 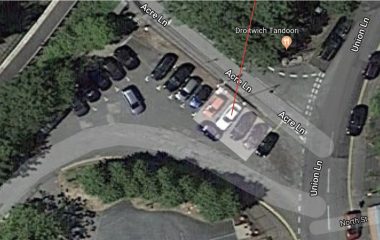 The area where Mr Green was parked. Picture by Google. s

Mr Green parked his car in an area Saba claimed was not a ‘marked bay’.

He said: “I bought a ticket and chose the last available space as the station was packed.

“There were cars parked either side of me and enough room for about four in total.

“It was clear to me and others these were valid spots, we had no reason to think otherwise.

“There are no signs saying ‘don’t park’ and I wasn’t obstructing anyone in any way.”

When arriving back into Droitwich following a day trip to Birmingham, Mr Green was shocked to discover a fine on his car window for ‘not parking in a marked bay’.

He alleged Saba had left this particular bay ‘unmarked’ as a way of ‘scamming people’.

“Saba has never painted on the floor or put a sign on the bays to let customers know it is a zone to avoid.

“In small print on a sign near the car park entrance it does say that customers must park in an authorised bay but how are we supposed to know what is considered ‘authorised’ – everyone parks there and it looks like any other part of the car park.”

Saba, which denies any wrongdoing, would collect £104,400 each year (based on 261 working days) if it fined four customers each day.

“I am going to take this to court if necessary as I feel they are taking advantage of people including those who are elderly or have a low wage and cannot fight back.”

A Saba spokesperson told the Standard due to safety reasons, there were no marked bays in this particular area of the car park.

“It is to allow for flow of traffic and access for emergency vehicles.

“Signage within the car park makes it clear at the station that all customers must park in a marked bay.

“The customer was not in a marked bay and this is why a penalty notice was issued.”

Three shoplifters arrested on the M5 near Droitwich after police pursuit