ZUMBA sessions will be held next weekend in aid of Melanoma UK and to help a Droitwich man in his quest to fund a high-tech £30k mole-mapping machine.

Mike Hull from Droitwich, who has been battling melanoma since 2013, has already collected £6,000, raised through a walking football tournament last year.

Despite his diagnoses and against all the odds Mike is still here and to celebrate he wanted to hold a second DAM (Droitwich Against Melanoma) Trophy contest on May 31 but it had to be cancelled because of Coronavirus.

Stella Thomas, who was going to hold Zumba sessions as part of the all-day event, has put on next weekend’s fund-raiser.

Mike and his wife Carol’s daughter Amanda attends sessions in Perdiswell with the Worcester-based instructor who was happy to help and has enlisted fellow teachers to assist her for the event. 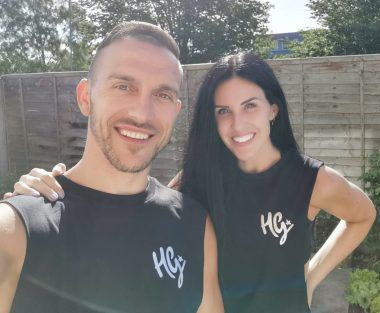 There will be five Zumba instructors presenting from three different locations via Zoom for next Saturday’s Zumba Fitness and three instructors leading Zumba Gold on the Sunday. Both sessions – on June 27 and 28 – will be from 11am to 12.30pm.

Admission is by a minimum £8 donation per family and when people sign up they will be sent the Zoom link for the sessions.

Mike is hoping the event raises as much money as possible and wants to hold the DAM Trophy later in the year, maybe in September.

He wants to thank Melanoma UK which has helped him during his fight and get closer to funding the revolutionary machine.

Mike’s battle has been a roller-coaster – the cancer spread to his lungs in 2016 and despite an operation to make him cancer-free it returned.

There was worse to come when a PET in March 2017 showed he had a tumour on his spine and five in his liver – all melanoma.

After exhausting all the treatment options available he was contacted by Gillian Nuttall, the CEO of Melanoma UK who managed to get him on a drugs trial which he is currently undergoing every four weeks at the Royal Marsden Hospital in Chelsea.

Mike said: “The mole-mapping machine is an amazing device which scans the whole body and can catch melanomas at an early stage.

“This saves patients from more heartache and money on more expensive treatments if the melanomas are not discovered until later.

“I want this to be my legacy – to help others who find themselves in the same situation as me.”

Visit https://justgiving.com/fundraising/damtrophy to donate and register for the event.