RESIDENTS in Wychbold have slammed Dodderhill Parish Council for having a chestnut tree which was more than 50 years old chopped down.

Parishioners learnt of the proposed felling near Wychbold Village Hall on Monday and a stand-off ensued with a socially distanced protest by five people who surrounded the tree to stop the contractors from getting to it. 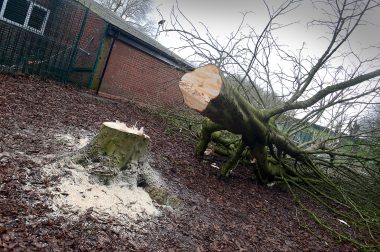 But they returned at 7.44am on Tuesday morning and felled the tree.

It comes after the back store room of the village hall has suffered from subsidence and a structural survey was carried out on the building. But tests into the causes of the movement were inconclusive.

The examiner said: “It is not possible to comment on the cause of the movement without further investigation in the form of trial pits and an investigation of the below ground drainage.”

They added past brine workings in the Droitwich area could not be discounted.

And it said: “The most probable causes of movement are either an escape of water from the below ground drainage disturbing the equilibrium of the bearing strata allowing further consolidation to occur, or more likely in my opinion the soils in the area will be a clay and roots from the adjacent tress will have extracted moisture from the clay, which in turn will have caused the clay to shrink and the rear extension subside.” 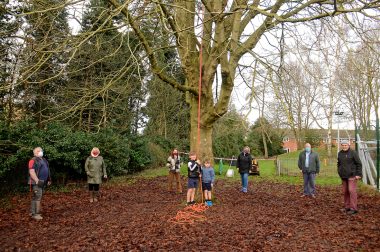 The report added the hypothesis was consistent with cracking which was noticed in the autumn of 2019 and worsened during the summer of 2020.

“Both the summers of 2019 and 2020 were particularly dry in the Midlands region and a large number of subsidence claims were reported in these years.”

It concluded a series of trial pits across the back of the building would be required, along with a CCTV survey of below ground drainage, to fully determine the cause of the movement.

Parish Councillor Carry Smart, who was among the protestors on Monday, said she and the majority of residents felt the evidence was not conclusive enough and further tests should have been carried out before felling the tree.

“If those tests proved it was the tree we would have accepted it but we were trying to delay it being chopped down so that could happen.

“To get the contractors back at that time the next morning was underhand.

“If the subsidence still continues, that beautiful 50-year-old tree will have been cut down unnecessarily.”

Her thoughts were echoed by angry residents who took to the Wychbold Network to express their sadness and disappointment.

One accused the council of acting in an ‘incredibly underhanded and unprofessional’ way.

The council has also been accused of not fully consulting the public before the felling went ahead.

Coun Alyson Keane, chairman of Dodderhill Parish Council, said the insurance company asked for a survey to be carried out after a claim was made to repair the building from the subsidence and, after reading the report, it appointed a loss adjuster and instructed for the chestnut tree to be removed as it was too close to the building and possibly causing the subsidence.

With regard to the contractors cutting down the tree between 6.30am and 7,30am this morning, she added: “They tried to do it on Monday but were stopped from doing it by a small number of people – the tree needed to come down before the insurance company would pay for the work to be done so we left it in the contractors’ hands to cut the tree down.”

In November we reported how residents in Wychbold had launched a petition in a bid to get Dodderhill Parish Council disbanded.

To read that story and find out more about the petition and signing it, click here.

REVEALED – The artists who will be transforming Droitwich’s underpasses