A PLAQUE was unveiled at the Droitwich Mural last Friday to shed more light on the piece and the buildings featured on it.

There was a small gathering at the ‘Buildings of Droitwich’ artwork and speeches given by Mayor Coun Bill Moy and Helen Karakashian, the chairman of the Droitwich Arts Network (DAN) which led a campaign for the piece to be returned to its former glory.

The fully-restored mural, created and installed in 1976 by Philippa Threlfall and her husband Kennedy Collings, was unveiled back in May.

The different parts of the piece are raised so blind and partially-sighted people can feel their way around it.

Another poster by the plaque uses numbers to detail their buildings by their position on the mural.

Coun Moy said: “It’s absolutely fantastic – I’d like to say a big thank you to everyone from DAN for all the hard work they have done in securing this mural for many years to come.”

Helen paid tribute to historian Alan Davey, saying it would not have been possible without him.

“We have quite a few blind people visiting Droitwich Spa and once they have scanned the QR Code they can then feel the different buildings on the mural while they listen to the information on each one.”

Alan added: “The fact the mural is tactile is fantastic but we felt they needed more information and to do that using Braille would not have been practical.

“The QR code and audio description was the perfect solution.” 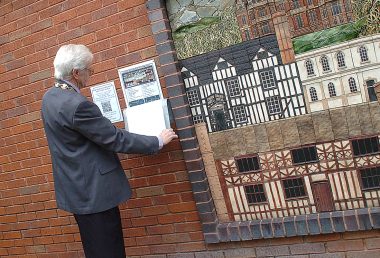