A PLANNING application to secure the long-term future of Droitwich’s Raven Hotel has been submitted to Wychavon District Council.

The proposals from the building’s new owners come just days after pictures emerged showing parts of it in a shocking state of disrepair.

Many people took to social media to express their anger and sadness that it had been left to go to rack and ruin. 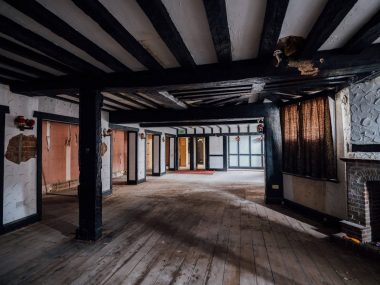 But the council said many of the pictures were taken in the ‘newer’ added sections which had fallen victim to vandalism with roof tiles and copper wire being stripped from the building.

Regular fly-tips had been carried out in those sections which had also suffered severe weather damage.

The council pointed out that part of the building was going to be demolished anyway to make way for 51 new homes after planning permission for them was granted in 2018. Work has already started to remove rubble and other materials in preparation.

The original Grade II listed timber frame building, which is in a better condition, will be retained and protected.

Wychavon recently met with the new owners, who with to remain anonymous at this time, to tour the building, advise on its condition and discuss the plans for the hotel.

The council has released pictures of the historic section of the former hotel which the owner is looking at with a view to bring it back into public use.

A planning and listed building consent application has been submitted, will be published once validated and will be considered by Wychavon’s Planning Committee at a future date.

Coun Richard Morris, Executive Board Member for Economic Growth and Tourism, on Wychavon District Council, said: “I also saw the pictures circulating on social media and was shocked to see the state of the building.

“Like many people in the town I have great memories of the hotel, it was really a big part of the community.

“I am assured the historic part will be protected and form part of any new future development supporting our community.”

Coun Martin King, Executive Board Member for Town Centres and Council Efficiency, added: “This is an important historic location at the heart of the town centre and it is good to finally see progress being made on regenerating the site.”