We catch up with amazing Worcestershire artist Mr Sce

THIS STUNNING artwork on clingfilm in Droitwich’s Lido Park delighted walkers and visitors out on their daily exercise session.

We posted a story about it last week and within minutes we were inundated telling us about its creator – Pershore artist Mr Sce.

Since March last year he had pictured most of our favourite wildlife, including kingfishers, badgers, robins and foxes – mostly in Pershore.

This was his first one in the Spa.

He said: “I started spray-painting in 2001 but the cling film pieces began during the first lockdown.

“I was going to create my own boards but it would have been expensive and I got this idea after seeing similar pictures by these French and Russian chaps in woodland because there were not a lot of walls about. 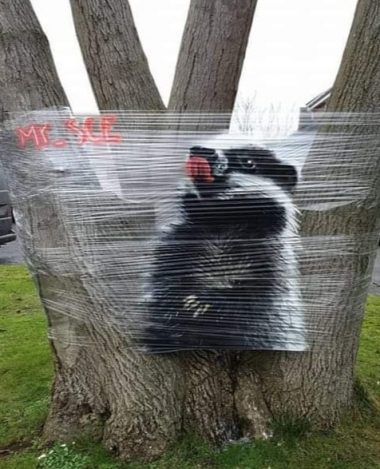 “It’s also temporary and means nothing gets damaged.”

After seeing his earlier works, he started to get requests – both for areas to visit and for which animals to depict.

“I really enjoy doing it and didn’t expect it to take off like it has.”

He told the Standard the badger was his favourite because of its ‘cheeky’ expression.

He is currently in Estonia with his work as an industrial gas engineer and he’s even been creating some art work out there.

He wants his Worcestershire followers to know though that he will be back soon with some more designs.