DROITWICH Tennis Club capped an excellent year on and off the court by picking up three awards at the 2016 County Aegon British Tennis Awards evening for Herefordshire and Worcestershire at Worcestershire County Cricket Club.

After being awarded The Best Junior Tennis Programme in 2015, Droitwich continued their junior success as St Peters First School claimed the 2016 Education Award.

Many children from the school regularly use the courts and receive the coaching provided at Droitwich which has been recognised by the LTA for the second consecutive year. 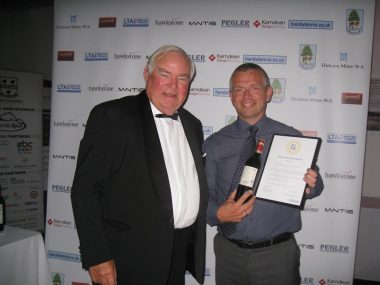 Chairman Neil Bates, winner of the 2016 Volunteer of the Year

Club chairman Neil Bates was thrilled to receive the 2016 Volunteer of the Year for his efforts to support and grow tennis at both the club and across the community, in addition to supporting the scheme to raise money to resurface the tennis courts in the lido park.

The club was also awarded the prestigious “2016 Highland Spring Club of the Year”, an award that Droitwich had previously won in 2014.

The judges commented that this was down to a number of reasons that included a record year on the court, the increase in participation across all ages and it’s community involvement including a Three Peaks Challenge in July which raised more than £3,000 for Macmillan Cancer Support.

To find out more about the club, visit www.droitwichtennis.co.uk