MEMBERS of a Droitwich-based cycling team have spoken of their shock and disbelief after one of their team was deliberately pushed off his bike, causing him to sustain a badly broken arm. 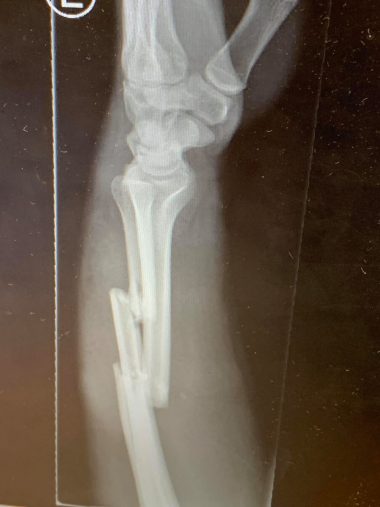 The incident, which involved the 21-year-old from The Chateau Impney Cycling Team, happened in Stonehouse Lane, south Birmingham, between 7.05pm and 7.20pm on Thursday night.

A passenger in a car leaned out of the window and pushed Luke as he was riding along the road.

He ended up crashing into two parked cars, sustaining a really bad break – it was broken in three places and requires surgery to pin it back together.

His bike was also written off.

His team-mates on The Chateau Impney Cycling Team Facebook page appealed for witnesses, anyone with any information, CCTV, dash cam footage to come forward.

“I’m in shock that there are people out there, who would do this for a ‘laugh’, the consequences of their actions have had far reaching impact on many people, especially Luke.”

They added they were desperate to catch the person who carried out the attack to get justice for Luke and to ensure it did not happen to any other cyclists.

A fund-raising page has been set up for Luke to get him back on his feet and pay for a new bike.

Witnesses or anyone with any information should call West Midlands Police on 101 or Crimestoppers on 0800 555 111.