MOTORISTS are being urged to take care when driving in the current weather conditions.

Officers from the Operational Policing Unit (OPU) posted the above picture of a crash which happened earlier today.

There was a three-vehicle crash between Junctions 7 (Worcester) and 6 (Droitwich)at 6.55am where one car ended up in the central reservation. A man and a woman were treated on scene for minor injuries before being taken to Worcestershire Royal Hospital for further assessment.

The police want to warn people to slow down and adjust their driving to the conditions.

There are currently yellow weather warnings in place for wind and rain across much of the country which can prove hazardous as people embark on their journeys.

Earlier today there was another crash on the M5 at Junction 4a (for the M42). 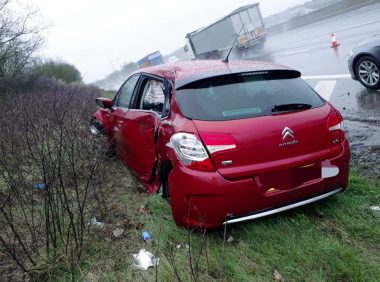 The ambulance service were called to the crash initially but were stood down as they were not needed.

The driver had a lucky escape.