HEREFORD and Worcester Fire and Rescue Service had an unprecedented day yesterday after rescuing people from 40 vehicles across the two counties and assisting with 30 incidents where properties were affected by floodwater.

Fire chief Michael Cadman said of the 70 people saved – between 9am yesterday and 7am this morning – there were 64 adults, three children and three teenagers.

A total of 38 rescue incidents were attended, 38 involved cars in floodwater.

Control staff and response teams had to be recalled to duty to deal with the demand.

Seven people were trapped from a vehicle in floodwater in Hay Lane, Shernal Green at 2.25pm. A sled and wading equipment were used by fire crews.

One woman was rescued from a car in floodwater in Elmbridge area of Droitwich.

A sled was used to get her to safety. 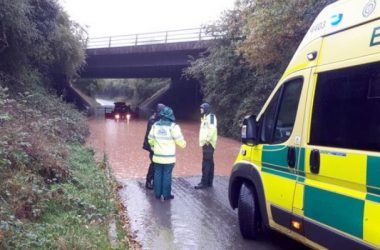 Three people were rescued from a car in Droitwich when it became stranded in the deep water at Green Lane.

Three people were rescued from floodwaters at 9.47pm last night when a car became stuck in floodwaters in Smite Hill, Hindlip.

The water was around a metre deep and crews rescued two adults and a disabled child using a sled wheelchair.

The vehicle was later recovered by the RAC.