Key roadworks on Droitwich's A38, Copcut and Pulley Lane finally complete after 18 months of misery

LONG-SUFFERING commuters in Droitwich breathed a sigh of relief this morning when a key route used by drivers was opened with the new traffic signals in operational.

Works on the A38 from Copcut to Pulley Lane had taken more than a year with temporary traffic lights and speed limits in place, snarling up the carriageway and delaying motorists’ journeys. 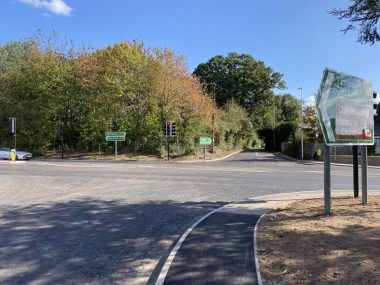 The works themselves, which started last March, were due to be completed by this April.

But, because of poor weather at the end of last year and the Covid-19 pandemic that date was then put back to May and the project has only now been completed.

Coun Richard Morris, who represents the neighbouring ward, said: “There are still things which need doing with regard to pathways and there are questions over the width of Pulley Lane which I think needs to be wider, signage and bus stops.

“I empathise with the problems over the past year that not just the drivers have had to put up with but also the businesses like the Copcut Elm, the golf range and Churchfields.

He added a lot of people were also sceptical as to the effectiveness of the new road layout and signals would have on improving traffic flow and reducing congestion.

“And I think there are lessons we need to learn with regard to developer-led highways so we don’t make the same mistakes in the future.”

He said one set of current works in Fernhill Heath and others in Evesham were prime examples.

With regard to the A38 from Copcut to Pulley Lane, Worcestershire Highways will now inspect the area to ensure everything the developer needs to do has been completed before the county council officially adopts the road.