A THREE-year-old’s festive design has been chosen for a Droitwich estate agent’s Christmas card.

Philip Smieszala, with a little help from his parents, won the competition run by Nicol & Co with what was described as a ‘a gorgeous snowman and festive tree’. 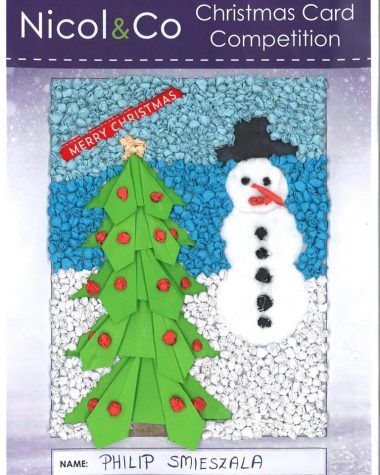 The intricate creation by the St Joseph’s Catholic Primary School nursery pupil scooped 30 copies of the card for his own family’s use, a Santa’s sack worth £50 and a £300 donation for St Joseph’s school library.

The designs were placed on Nicol & Co’s Facebook page with followers voting on which one should be the winner.

Managing director Matt Nicol said: “It was wonderful to see all the colourful entries that we received, and great fun watching our Facebook followers decide on the best with their ‘likes’.

“I was really pleased to see Philip’s design win as it was such a detailed card that contained hundreds of small rolled up pieces of colourful paper.

“He obviously spent ages with his parents making this great card that makes people smile the instant they see it, and it’s just the kind of colourful design we were hoping for.

“We are delighted that Philip gets to enjoy a prize for himself, and that St Josephs can now invest in some new books for all its children.”

Cath Bryan of St Joseph’s Catholic Primary School said: “We are thrilled that Philip won this competition and are really grateful to Nicol & Co for their generosity.

“We will put the prize money to good use.”