ONE of the many who will be remembered today on the Armistice Day Centenary will be Sapper Richard Langrick who is buried in Droitwich’s St Mary’s Churchyard. 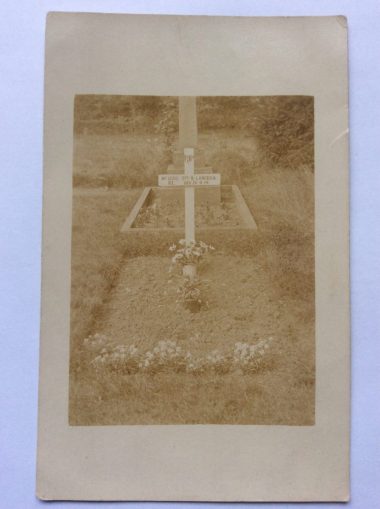 Richard Langrick was born at Market Weighton, East Yorkshire, in October 1884, and christened in the parish church there on October 24 in the same year.

His parents, Annie Langrick née Jackson and Richard Grisewood Langrick, were both residents of the town.

Richard Langrick first appears on the census of 1891 at the age of six, residing with his parents, two brothers (Harry, aged four and William, aged three), and one sister (Ethel, aged one) at Northgate, Market Weighton, Yorkshire. His thirty-two-year-old father, Richard

G. Langrick, was at this time working as a ‘joiner and cabinet maker’.

On the census of 1901, the Langricks’ address is given as High Street, Market Place, Market Weighton and every member of the family has Market Weighton listed as their birthplace, with the exception of Richard’s mother, Annie, who was born at Seaton Ross, Yorkshire. Richard G. Langrick continued to work as a ‘joiner and cabinet maker’, and his son Richard is also listed as a ‘joiner’ – most probably working for his father.

On this census there are four new additions to the family –

these being Robert, Annie, Elizabeth, and Jane.

The family were still present in Market Weighton at the time of the 1911 Census; though Richard – who had joined the Royal Engineers in around 1905, and served for some years in Singapore – does not appear on the entry for this household. His name does appear, however, on the 1911 Census return list of commissioned and non-commissioned officers and rank and file, and informs us that Richard Langrick, sapper in the Royal Engineers, was still unmarried, and a carpenter by trade.

His father at this time remained a ‘joiner and cabinet maker’, the census further recording that he and Annie had eight children living, and a further two deceased.

At the beginning of 1912, 27-year-old Sapper Richard Langrick and 25–year-old Laura Topham were wed at Market Weighton, Richard being at this time a reservist back home as a member of the 29th Company.

This census of 1911 also tells us that Laura was residing in the household of John Hollings, bank manager of Market Weighton – along with his wife and their three sons. Here Laura worked as their

general domestic servant, in a property with eight rooms not including the scullery or bathroom.

Laura and Richard Langrick’s wedding took place in the following year, and in the second quarter of 1914, Laura gave birth to their only daughter, Alice, at Tynemouth, Northumberland.

At the outbreak of the First World War, Richard was still a reservist at home. But on August 12, 1914, he and the other members of the 29th Company arrived at Boulogne in order to help establish the British Expeditionary Force’s general headquarters near Cambrai.

On August 23 they met with the German Army at Mons in Belgium, and were forced to retreat after a stand at the Mons-Conde Canal.

On August 26, with the retreat continuing, the II Corps of the BEF met the German Army at Le Cateau-Cambresis, during which the 29th Company – including Sapper Langrick – would have been doing their utmost to maintain constant communications. The fighting here resulted in 7,812 casualties in just one day.

Less than a week later on September 1, GHQ retreated south, to a location 22 miles northeast of Paris, with the 29th Company fighting as before to maintain communications. They retreated still further south to Mortcerf on September 3, and on September 5, the First Battle of the

Marne took place, at which the British and French forces sent the Germans into retreat to the River Aisne, resulting in the First Battle of the Aisne which took place from September 12 to 15, 1914.

This led to the horrors and stalemate of the trenches on the Western Front.

In the middle of September 1914, Richard Langrick was invalided back home, and was convalescing at Highfield Hospital in Droitwich (which was originally established by Dr John Montague Cuthbertson in around 1894):

Highfield House was taken by Lady Georgina Vernon and Sir Harry Vernon (Local Honorary Secretary of the Red Cross Society) as a convalescent home for soldiers, but it is now mobilised as an administrative hospital with Lady Georgina as quartermaster, and Dr F H Foulds as commandant.

There were wounded soldiers there from many regiments across the country.

Many of the patients are there at the invitation of the Trustees of the Corbett Estate, receiving free treatment at the famous brine baths, the curative properties of which are so well known.

The men there received ‘every possible care and attention, and their food is the best and the most nourishing that money could buy’.

One of the men, in trying to describe the way in which they were treated, had difficulty in finding adjectives sufficiently complimentary in which to express himself.

Tragically, Sapper Richard Langrick did not recover, passing away just two weeks later. On November 21, 1914, the following was published in the Hull Daily Mail:

Market Weighton’s First Victim of the War. Very deep regret was expressed at Market Weighton yesterday (Friday) when the bell in the church tower tolled to announce the death of Sapper Richard

Langrick, jun., of the Royal Engineers, a native of Market Weighton, the eldest of four sons (who have all joined the colours) of Richard Langrick, sen., of Market Place, Market Weighton. Sapper Langrick joined the Royal Engineers over nine years ago. He was grafted out to Singapore, where he was stationed three years, returning home to England two years to serve on the reserve. He was a reservist when the war broke out, and was called to his regiment and proceeded to France. About

eight weeks ago he was invalided home ill, having drunk bad water, which completely upset his system. He was placed in the Birmingham Hospital, where, after a month’s careful treatment, he was so far recovered as to be able to proceed to Lady Vernon’s home for wounded soldiers at Droitwich [Highfield]. Here everything appeared to continue satisfactorily until a fortnight ago, when he had a serious relapse, and gradually sank.

His wife was called to his bedside on Saturday afternoon last,

whilst his father and mother [Annie] received a similar call on Monday.

His wife and mother were able to remain with him until the end, which took place on Thursday night.

Deceased, who was thirty years of age, about two years ago married Miss Laura Topham, the youngest daughter of Mr John Topham of Southgate, Market Weighton [his name is given as Joseph on the census returns].

The deceased, who leaves one little daughter, is the first victim of the war from Market Weighton out of a total of over a hundred.

The cause of Richard Langrick’s death is given on his death certificate as ‘toxaemic jaundice and purpura’, which is usually caused by exposure to T.N.T. or other toxic substances, and it is unlikely that his death was caused by drinking bad water as stated in the above article.

During the First World War, female workers in factories in England also developed the condition, and there were numerous poisonings of workers in the aircraft industries caused by the solvent used in the varnish applied to the airplane wings.

This solvent had been selected over other substances because it was low-cost and tightened the fabric.

The poisonings, which led to toxic jaundice, first became apparent in 1914, details of which are to be found in Toxicity and Metabolism of Explosives, by Jehuda Yinon: “During the first seven and a half months of World War I, 17,000 TNT poisoning cases, including 475 deaths, occurred in munition factories in the US.

including 96 deaths, were reported.

According to the Army Register of Soldiers’ Effects, Richard’s widow, Laura, was authorised to receive £5 15s. 6d. on 10 November 1915, and a further war gratuity payment of £5 was authorised in July 1919.

Richard Langrick was awarded the 1914 Star, the Victory Medal, and the British War Medal for his service during the First World War.

Richard’s younger brother William Langrick of the Yorkshire Regiment died in a military hospital at St Omer on July 20, 1915, and lies in the Longuenesse Souvenir Cemetery, France.

He had married Mabel Hargroves just six years earlier in 1909, and in December 1915 his widow was authorised to receive £3 3s. 4d., and received a further war gratuity payment of £3 in 1919.

Richard and William Langrick are remembered on two war memorials in their home town of Market Weighton. Their names appear on the First World War plaque attached externally at the Market Weighton War Memorial Institute, and also on the war memorial plaque in All Saints’ Church.

Though there are a number of inscriptions to casualties of both world wars in St Mary’s Churchyard Droitwich, the only Commonwealth war grave is that of Sapper Langrick’s. 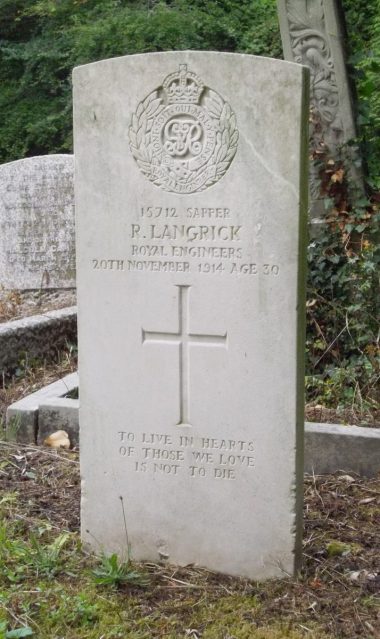 The badge of the Royal Engineers is at the top of the headstone, with the following inscription below:

To live in hearts of those we love is not to die.”

Laura Langrick did not remarry, and died in her late eighties in the district of Hull in 1975.

After getting in contact with Sapper Richard Langrick’s granddaughter, Suzanne Allcock, she very kindly sent me copies of two of her treasured photographs for display. 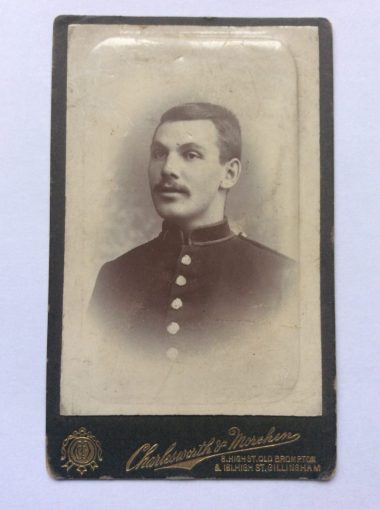 This is the first time that an image of Sapper Richard Langrick has come to light.