PUPILS from Westacre Middle School headed to Westminster to find out about how Parliament works, writes Eve Watson.

The visit, organised by Mid Worcetershire MP Nigel Huddleston and the Education Department of Parliament, was also aimed at enlightening the group on what careers in politics involved.

The youngsters, who were all aged between nine and 12, were given a guided tour around the Palace of Westminster, including the House of Commons and the House of Lords.

Isabelle Edwards, 11, said: “I’ve seen parliament on TV and I can’t believe I got to sit where the Prime Minister and all the other MPs sit.”

The pupils took part in a workshop, learning about the Suffragette movement and women’s fight for the right to vote.

Mr Huddleston MP then held a question and answer session with the children raising issues such as environment and local housing. 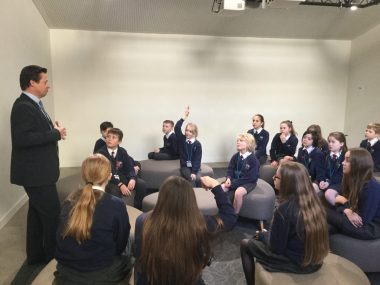 The school’s deputy headteacher, Mrs Doolin said: “I was so proud of all the children.

“We meet every week at school to discuss issues around school and in the local community and this has been an incredible opportunity for them to see the workings of Parliament and meet their own MP.

“The children seem truly inspired and we may be seeing some future politicians in the making.”